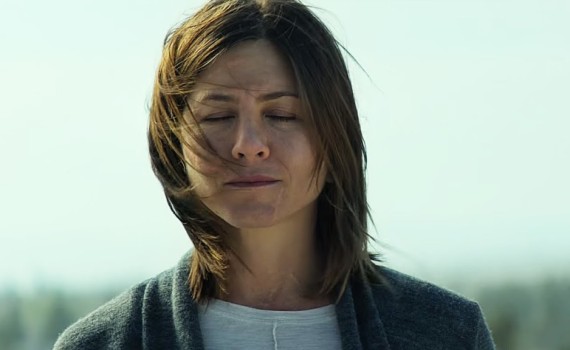 Jennifer Aniston, like all the cast members of Friends, has been fighting her entire career to be taken seriously, to be believable as someone other than a young New Yorker with a penchant for coffeehouse couches.  Matthew Perry has had a few comedic successes, but Aniston has been the only Friend to actually break free from that character and make a name for herself somewhere else.  It began while she was still on the show (Office Space, Rock Star, The Good Girl), continued right after (Derailed, The Break-Up, Marley & Me), and only picked up as she matured (Horrible Bosses, We’re the Millers, Life of Crime).  Now, with Cake, and at the age of 45, she may have given the best performance of her life.

Claire Bennett is in pain.  Physically, she’s recovering from an accident that left her with chronic back & hip problems, causing terrible, debilitating discomfort.  Emotionally, she’s dealing with a loss that she can’t recover from and won’t accept any help in dealing with.  This pain leads to depression, which leads to self-medication, which leads to suicidal thoughts, which leads to the complete destruction of the happy life she once knew.  Claire attends a support group for women with chronic pain, but when a young mother named Nina commits suicide, the group struggles to deal with their feelings about her selfish act.  Claire becomes obsessed with the concept of killing yourself and leaving your family behind, even seeking out Nina’s husband Roy.  The two begin a very unhealthy friendship that just might be exactly what they both need to regroup and move on.

Saying that Cake is an emotionally charged movie would be a vast understatement.  Pain & grief & loss & drugs & suicide & despair are the main topics here, with little to feel good about or hopeful for.  It’s difficult to watch someone in so much pain, both physical & emotional, and it made for an intense experience, to say the least.  Aniston was incredible as Claire, every wince and every tear, pouring her talent into this woman as if it might be the last role she ever played.  Sam Worthington was surprisingly great as Roy, since he’s never impressed me as much of a dramatic actor.  The cameos were nice as well: Mamie Gummer, Felicity Huffman, William H. Macy, Chris Messina, Britt Robertson, and Anne Kendrick as a hallucination of Nina, which was odd at first but quickly became just another very sad expression of Claire’s reeling mind.  A little more inspiring and a little less depressing than a film like 21 Grams, Cake is a movie with a difficult story to tell, but with the talent to do it when we’re ready to listen.