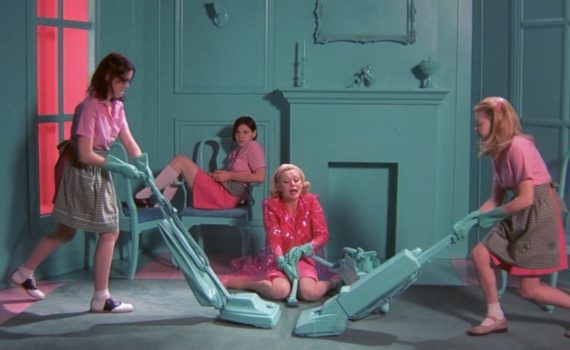 Jamie Babbit directed several episodes of Undressed in 1999 as well, for which I will always be grateful; that show really meant something to me when I was 16 and curious.  It was a boundary-pushing show, a counter-culture gem, a literal guilty pleasure, and was pretty educational, if not exactly the kind my parents would have wanted me getting.  Much of the same can be said about But I’m a Cheerleader; it was in some ways very ahead of its time.  This was my first time watching it however, and I couldn’t help cringe at the flaws, of which there were many, but I think I was also able to watch it as it would have been watched at the turn of the millennium, and, from that view point, things weren’t all bad.

Megan can’t be a lesbian; she’s a cheerleader!  She comes from a religious family, she’s super popular, she has a boyfriend; so what if she doesn’t really like kissing him and would rather imagine the other cheerleaders bouncing around, that’s normal, right?  Well, her family holds an intervention and they convince her to attend a conversion camp, where she does finally realize that she is indeed a homo.  But is that a bad thing?  The camp director sure thinks it is, and so do Megan’s parents, and so even do most of the other kids; they seem to want to change themselves into something better, more normal, more accepted.  All except Graham, a girl who isn’t afraid to be herself, and who might be Megan’s first love.

I’m not sure how that summary came off, but I want to make something clear; this film supports gay youth and denounces conversion, it just comes at it from a very campy direction, in the most literal sense.  It’s like over-dramatic horror of a different kind, the kind where your parents try to make you want to die simply for being yourself.  It’s horrible but it’s real, and this film makes it palatable by crafting it into a joke, while poking fun of all the assholes who really deserve it.  So bravo for that, that’s a pretty progressive message for the late 90s, and it was done almost in a Cry-Baby way, so colorful & crazy, which is weird but kinda works.  Babbit is more a TV director, so the whole thing feels messy and episodic, but her cast works fairly well, and is littered with names & faces: Lyonne, DuVall, Michelle Williams, RuPaul, Melanie Lynskey, Kip Pardue, Julie Delpy, Dante Basco (Rufio).  This is definitely a movie to watch once to have the experience, although it can’t be called well-constructed; the message is the point, not the delivery, if you can accept that and forgive the rest.