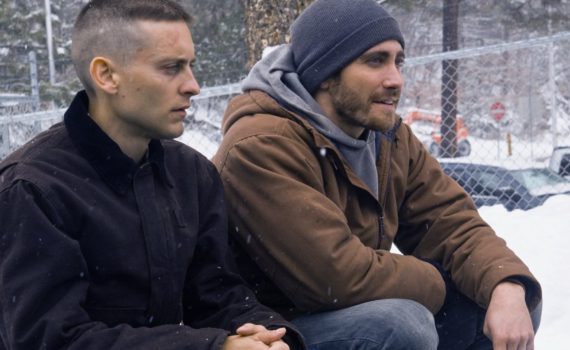 Apparently I need to see the Danish film that this American film is based on, because, my god, it has to be better than this crap.  One of my favorite modern war film is Danish as well, not to pare things down to one country; if you have not seen A War please do yourself a favor.  But Brothers is the exact opposite, a drama that works in no way, even when the emotion of a situation we understand far too well is laid at its feet and begs its story to be told.  What a colossal disappointment, for a first-time watch of a movie I just assumed would be strong, based on its content and its actors.  Boy was I wrong.

While serving in Afghanistan, Captain Sam Cahill is shot down in a helicopter and and taken hostage by Taliban forces.  Presumed dead at home, life goes on without him.  His wife Grace and two young daughters attempt to move past the grief, and they do so with the help of his brother Tommy, who is an ex-con, a troublemaker, a boy who never lived up to his big brother’s accomplishments, but who also steps up in a surprising way when Sam is no longer their to care for his family.  Tommy & Grace even begin to possibly seen each other in a different light, as maybe something more than friends, before the unexpected happens; Sam is found, rescued, and comes home, but to a house that no longer feels like his.

I was hoping for great, I would have settled for good, I guess I wouldn’t have been shocked by bad, but I honestly wasn’t mentally ready for god awful.  Brothers is a terrible, terrible, awful movie, from its bones on out, just a marvelously maladjusted piece of crooked cinema that doesn’t get its own story right, or, I guess, doesn’t get the story it attempted to Americanize right, which is more accurate and admonishing.  Every detail was dreadful; the music choices, the dialogue, the side characters.  And I have perhaps never seen two actors who were meant to play co-parents less than Tobey & Natalie; it was like they were aliens in the bodies of humans, pretending that they could have emotions and tickle fights.  My god it was bad, and not even Jake could save the day, and you should know that I absolutely adore Jake.  This was simply a miss, a whiff, a big swing-and-sit-down-on-the-seat-of-your-pants, and I’m shocked that there weren’t more red flags.