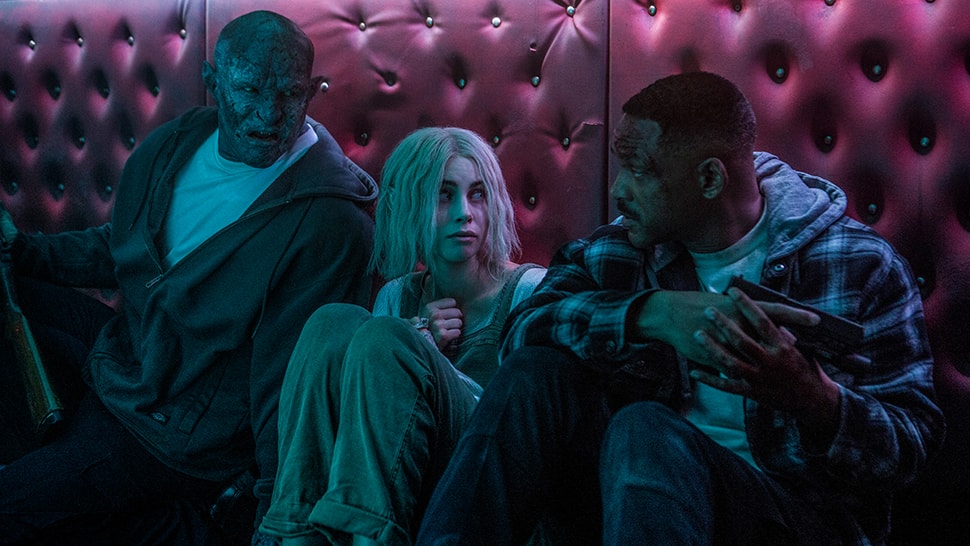 David Ayer is on some kind of a roll, with Suicide Squad and now Bright, two action-packed fantasies starring Will Smith, two movies that completely bombed.  One was supposed to be a big deal, one is an attempt by Netflix to become a big deal, and both failed miserably.  I won’t blame the director completely; I think quite highly of Fury and I’ve heard only good things about End of Watch, another buddy-cop drama set in L.A.  So Ayer has succeeded before; what happened this time?  The answers are probably too numerous to count, as problems arose around every corner, within every scene.  I don’t think it’s dramatic to say that Bright is one of the worst films of the year, Netflix or wide-release, and should be avoided & forgotten at all costs.

In a world where creatures straight out of a fantasy novel live alongside humans, all bets are off.  Apparently, two thousand years ago, there was a great war, and the orcs sided with the Dark Lord, ultimately losing when their leader was banished from the world.  But time doesn’t heal all wounds, the elves and the humans still remembering the ancient mistake.  Elves are now the wealthy of the city, humans are in the middle, and orcs do the dirty work, racial lines being drawn in blood and no one daring to cross them.  Until now, as Jakoby, an orc, joins the L.A.P.D., teaming up with a reluctant partner named Ward.  The duo is unlucky enough (or prophesied?) to stumble upon an ancient wand that all sides desperate want, a power that is far too strong for any faction to hold alone.

It’s not that Bright is bad, it’s that it’s so bad that you question ever watching a movie again.  Alright, I exaggerate, but Netflix can’t be happy with the product that was released, and it’s sure to tarnish the blossoming reputation of a studio that wants you to take them seriously.  It’s like someone combined Training Day with What Happened to Monday, caked Joel Edgerton in creature makeup, and sprinkled in some magic.  That turns out not to be a good thing, because this film was all over the place.  It was wild but in a dumb way, unique but incomprehensible, funny but kinda like an idiot wrote all the jokes and dialogue, so that you really couldn’t be sure what exactly they were trying to do.  Smith was dead on his feet, Edgerton was all covered up, Edgar Ramirez and Noomi Rapace embarrassed themselves, and I dare you to find someone you know who enjoyed this flop of a film, find them and then stop being their friend.