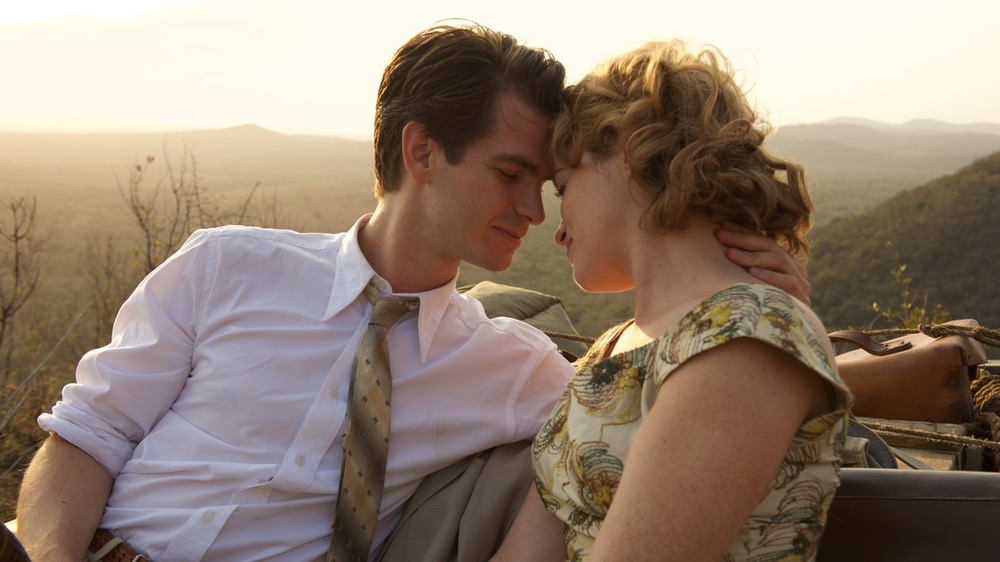 It could not be more predictable and even understandable; amateur directors borrow heavily from other, successful films to ensure that their projects won’t fail and embarrass them.  That’s not even a dig, it’s just the truth, and I hardly blame them; when you don’t know exactly what you’re doing it’s smart to copy off someone who obviously does.  As long as you can eventually use your own voice when becoming a filmmaker, we’ll forgive a little early borrowing, it’s really not that big a deal.  Serkis doesn’t know exactly how to be a director, but he has this incredible true story to base Breathe off of, and so he uses The Theory of Everything as a guide, resulting in a film that is too much of a duplicate to enjoy solely on its own, but that can also be appreciated for what it does get right.

Tea merchant and natural adventurer Robin Cavendish set his sights on the lovely young Diana, won her hand, and proceeded to take her to Africa to be by his side as he saw things that most of us can only dream of.  He was a soldier, a pilot, a sportsman, a fast driver; Robin liked things to be exciting, and he sculpted his life to meet his expectations.  But while in Africa he was exposed to the polio virus, the disease hitting him so terribly that he was put on a ventilator and told that he had only months to live in his completely useless body.  After an initial period of shock and devastation, and with the help of his loving wife, not only did Robin outlive predictions, but he invented a way to live outside the hospital, to see the world in a newly designed chair, to experience life just as any other person would, to love and laugh and enjoy each moment that he was given, knowing that they would soon be gone.

The first thing Serkis did well was to draw from established, British, television talent to offset the use of a young, Hollywood icon; although, to be fair, Garfield is half English (half American) and was raised in the U.K. (but was born in L.A.)  Foy from The Crown, Hollander from Doctor Thorne, Ed Speelers & Hugh Bonneville from Downton Abbey; smart choices that led to an authentic feel to the characters.  The acting in this movie was great, I especially loved Hollander as twins, and Garfield was an impeccable emotional lead.  But what failed this film was the deja vu element, because it mirrored others far too much to be given credit for individual success.  The history, the disability, the marriage; we’ve seen it before, and it was heavy the first time, I don’t think we asked for it to be redone.  That’s the greatest problem with Breathe, that and a little bit of a slow pace, which keeps it from being great, but shouldn’t necessarily keep you from watching.