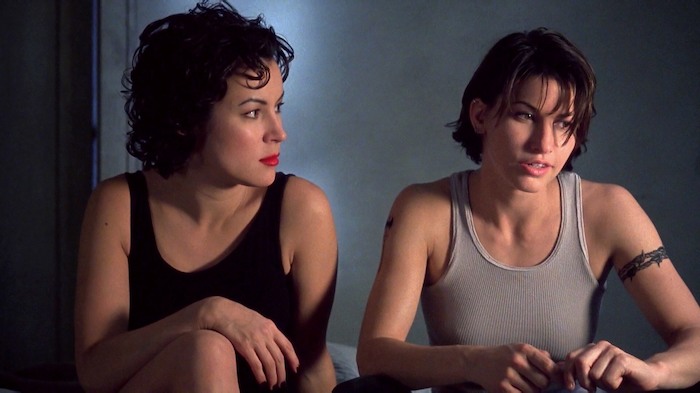 I love when I’m surprised by a movie.  It doesn’t matter if it’s in a good way or in a bad, I love when I rate a movie at the end and that rating is not at all what I had expected.  Now, with that said, I don’t like being tricked by a movie.  I don’t like getting one thing when I expected another.  But Bound, in both areas, gave me what I wanted; a film that was what I knew it would be, but better than I could have ever imagined.

The story is a classic one; a mob deal gone wrong, everyone suspecting everyone else of stealing the dough, plots within plots, and a few gunfights tossed in.  But the real drama revolves not around the Mob, but around the budding romance of Corky and Violet, two women who share a connection in this twisted, underground world.  As Vi’s money-laundering boyfriend Caesar weaves his own webs, she and Corky attempt to find a way out; out of the Family, out of his control, and into a world of their very own.

I was blown away; I just didn’t see it coming.  Part film noir, part love story, part crime/suspense, part dry comedy, this film has it all.  With a David Fincher flare, Wachowski’s directing was superb, with beautifully simple scenes and sensory-heavy moments.  The acting was spot on; perfect dead pan humor and crime drama homage.  The details were good, but the love story drove the plot.  Tilly and Gershon were a perfect pair.  This film has a reputation for explicit lesbianism, but it just shows how desensitized we must be to heterosexual sex in modern movies; the love scenes, while quite adult, were far less graphic and vulgar than your typical Hollywood sex scenes.  With a great love story, a cool vibe, some terrific acting (especially by Pantoliano), and a wickedly sick sense of humor, Bound may not be for everyone, but it’s a must-see movie for any movie buff.