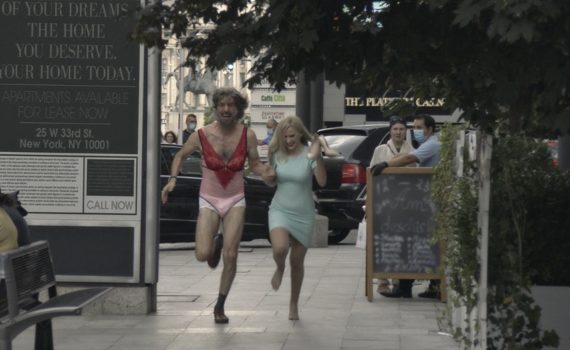 The original Borat is, oddly enough, one of the most infamous movies ever made and one of the most purely recognizable films of the past 20 years.  It’s perhaps the most original, off-the-wall, bizarrely entertaining, absolutely memorable pieces of whack-a-doo we’ve ever seen, and yet it has remained with us, it has cemented itself as an icon, and it will always live on in pop culture history until, some day, an alien will watch it and wonder why this is a piece of our collective culture, and if we were there we wouldn’t know what to say to defend ourselves.  Maybe it’s that simple; there is no defense for Borat and there is also no reason, it just exists, and it’s one of the funnest things ever made, although no one knows why.  Borat 2, a repeat of the madness, another round of shots, another excuse to die laughing?  Bring it on.

Borat Sagdiyev, the Kazakh journalist, known for promoting his small country in ours to the embarrassment of all, is back with a chance at redemption.  This time, his government wants him to deliver a gift to Vice Premier Michael Pence, so that the leader of Kazakhstan might be added to the cabinet of evil dictators that McDonald Trump has surrounded himself with in recent years.  Borat must deliver a famous chimp to Pence in Texas, but when the plan goes awry Borat’s daughter will have to do as a present, and any one of Trump’s friends will do as a recipient.  But the world is in the middle of a pandemic, Republicans have taken over the conspiracy theory message boards, and Borat doesn’t know exactly what to do.  To make matters worse, his daughter is starting to think for herself and is no loner willing to be caged like an animal and to be forbidden to have independent thoughts.  It’s a wild world, but our hero will face it like he always does; oddly, uncomfortably, and ultimately the worst way possible.

The first time around, Borat caught us with our pants down.  Cohen’s film was all over the place, but at its heart it was about pulling back the curtain and exposing some real evil and idiocy.  He exposed a lot prejudice, he embarrassed a lot of people, and that’s great, because we needed to see what was happening, and what could still happen even when people knew the camera was rolling.  And, of course, some of it was just plain stupid, ridiculous fun, and that’s probably why we love Borat so much, because he’s so irreverent and awkward and upsetting and entertaining.  Round two hits even harder, because Cohen focuses on our biggest current problem; Conservatives.  Right wing ideals are as much a disaster as COVID, and he breaks that news to us with no Novocaine; here they are, here’s what they believe, here’s how they act, how is this happening.  The virus, the rallies, the false info, the hypocrisy, the leaders of it all; we get under the surface because Borat can take us there, and it isn’t pretty.  And it’s all still heavily sprinkled with lunacy and fun, belly laughs and cringe-worthy moments, all the patented appeal that you knew would be there again and enjoyed so much the 14 years ago.  If you like the first you’ll dig the second; it slaps that hard.