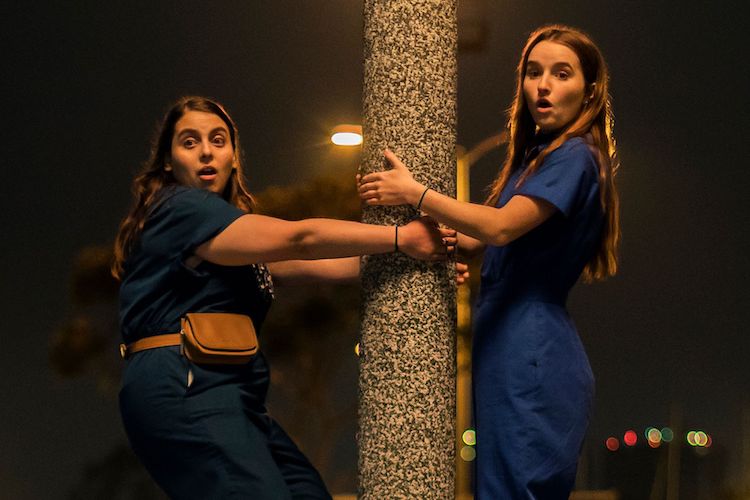 Sometimes people want a movie to succeed so hard that they ignore its real quality, and, call me old, but that seems to be a problem that’s growing among younger critics.  I’m all for social equality, I’m all for inclusion, I want audiences to be “woke”, but I also think that I have the power to reserve judgement and/or compartmentalize when it comes to opinions on films; I won’t like them just because I’m happy that directors/stars have finally been allowed access to the club.  I’ll applaud that, sure, but I’m still happy to give you two big thumbs down if I don’t like the product you just presented me.  I hope I’m being clear on that, and perhaps this is a phase we go through, protecting content that’s vulnerable because we expect backlash, even if that content isn’t really as great as we want to make it out to be.  I think Booksmart fits into that category; it’s awesome that Wilde made a coming-of-age flick for girls, it’s honorable to fight for that representation, but that alone doesn’t make it a cinematic masterpiece, which is what some excitable viewers want to label it.  Rather, it’s an OK movie that pales in comparison to those it copies off, coming across as wonderfully irreverent but oddly incomplete, like it was crafted too quickly, and perhaps with too much blind applause.

It’s time to graduate high school, it’s time for college life, another fork stuck in the road and all that; congrats to the class of 2019.  For best friends Molly & Amy, that means an end to their productive HS careers and a segue to their similarly studious university years, where they’ll succeed, advance, make a difference, change the world, all good things, all good things.  But there’s one problem; good grades aren’t the only thing that can get you into good schools, money and sports do the trick as well, and they’re finding out, to their chagrin, that perhaps they tried a little too hard and enjoyed their teenage times a little too infrequently.  So the plan is to make up for lost time, and they’ve only got one night to do it, so they’d better get cracking.  They hit the town, attempting to find the ultimate party, but getting sidetracked by various misadventures along the way, until they’ve lost sight of what they were focused on to begin with.  Their friendship will be tested, drugs will be ingested, and they’ll maybe get arrested; oh the places you’ll go, huh? Just to touch on that greater subject one more time, I like that this movie was made, but that doesn’t mean I have to like it as a film that I critique independent from all it might mean/represent/raise up.  And honestly, I did like it, I liked it a good bit, fun was had, cleverness was observed, I just don’t think it’s nearly as good as you’ve perhaps heard, especially if you heard it from people who are dying for this film to succeed.  Maybe that’s privilege talking, I don’t need to support this project because it doesn’t advance me, and I can recognize that.  But I just have to move forward with who I am and what I have, and I just think this movie had problems.  It’s not completely original, that’s for sure; it’s a mix between Superbad, Lady Bird, Dazed and Confused, but not nearly as strong as anything it pulls from.  It’s hilarious at the beginning, emotional at the end, but the middle majority suffers greatly from dull humor and a pair of young actresses in their mid-20s who were not nearly young enough to be playing these parts.

Additionally, Jessica Williams was awful, Jason Sudeikis wasn’t his usually solid self, the girl always popping up at every party was a stupid idea, and just, generally, weirdly, hard-to-explain-ally, it simply wasn’t wonderful.  It was missing some magic maybe, but it did get me to laugh a good bit, especially early, and this generation’s girls now have a high school comedy to remember, like I have with American Pie I guess, which is something everyone deserves to be able to look back on fondly.  Ultimately, I think you should just go watch Eighth Grade or Mid90s instead, they are so much better, and are also modern low-publicity flicks that need our support.  Booksmart is fine but weak, an attempt at, rather than a successful rendering of, the classic, generational, underliningly meaningful teen comedy.  It borrows too heavily from Superbad, like way too heavily, and can’t reach the same level.  Both movies featured amateur directors, but Superbad was written by Seth Rogen & Adam Goldberg, a pairing that has become something special, while Booksmart had four different writers, which is way too many, and we’ll see where they go from here.  Olivia Wilde might have shown promise in her debut, but it wasn’t a home run, so we’ll be checking back to see what she does next, and if she can improve despite the assurances of too many that she’s already peaked.