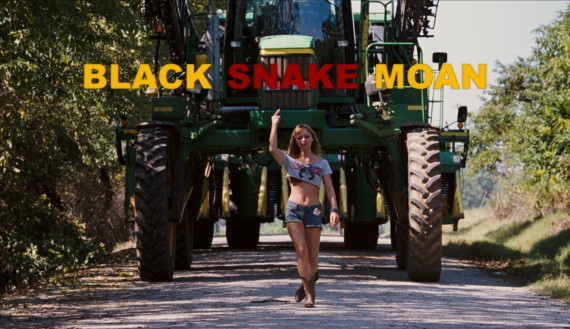 If you’ve ever wondered what O Brother! would look like drunk, you’ve come to the right place.  Black Snake Moan is what happens when a blues story gets hammered, takes off its clothes, and asks to be taken as a metaphor.  It’s a mix of music & mayhem that’s a little bit country and a little bit rock & roll.  Craig Brewer wrote and directed this odd tale, as he did Hustle & Flow and the Footloose remake, two films that seem incredibly dissimilar at first glance, but relate to Black Snake as more than just musicals.  Although, to call this film a musical isn’t exactly accurate, as it’s a drama with music, not the other way around.  Regardless, it’s a movie of strange choices & encounters, created with a unique artistry, and worth your time.

Lazarus & Rae are two very different individuals going through two very similar life changes.  Laz just lost his wife; not to cancer, but to his back-stabbing younger brother.  Rose is gone after many happy years together on a country farm, and Laz’ life might just take a turn for the drunken & depressed.  Rae is losing her man to the army, something she does not support at all.  Ronnie is her confidant, her only friend, and the one person who understands why she is the way she is.  Rae can’t be alone, can’t control her urges, can’t resist evil men, and won’t survive without someone to look after her.  And that’s where Laz comes in.  He needs a project, needs to fix his own life via someone else, and Rae is the perfect candidate.  So he takes her home after finding her beat up & left for dead, but his definition of ‘savior’ might be a little weird, and Rae might not be immediately appreciative of his help.

If you’ve heard about this movie at all, you probably know what it is that makes it so very different, how Laz attempts to help his new-found “friend”.  I’ll leave it ambiguous in case you haven’t.  Suffice it to say, he’s got some crazy ideas, but there’s a method to his madness.  And so the plot really starts when the two meet & begin their friendship, evolving into a story about releasing fears & controlling your own actions.  It’s a cool concept, shown to us in an original way, and I appreciate the thought put behind the story.  Then there are Jackson & Ricci, who couldn’t be more dissimilar, and yet play off each other so well that the periphery fades away and we’re left with a classic redemption tale.  Their acting is very strong, JT is a surprising asset as a side character, the music swells in hypnotic fashion whenever it is called upon, and the film leaves a feeling of hope that transcends its rough appearance.