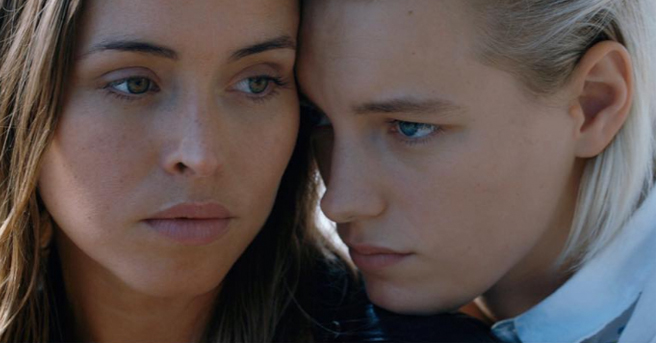 Shot using an all-woman crew and focusing on a love story that has only one male character, April Mullen’s Below Her Mouth is a provocative and daring attempt to share something with audiences that might make them uncomfortable, and for no good reason.  We are used to seeing clothed men/naked women in sex scenes, we don’t bat an eye at heterosexual passion, and we are immune to many acts of aggressive sexuality, as long as it’s led by a dominant man.  But turn those roles on their heads, focus on a romance between two women, show without much edit their nights in bed (and days in baths) and we become much less comfortable.  If Mullen did anything it was to force us to examine our own biases and what we consider normal, a noble effort that deserves some respect, regardless of how the cinematic aspect of her project turned out.

Jasmine is a typical, successful, beautiful, responsible young woman who thinks that she’s happy in her current life.  She’s a fashion editor, she’s engaged, her fiancee is wealthy, she visits the occasional club to have just the one drink; her days might not be that exciting, but she knows where she’s headed, and doubtless she’s the envy of women all over the world.  Dallas is her antithesis; a free spirit, good with her hands, owns her own roofing company, is originally from Sweden, has a new girl at home every night, and lives as dangerously as she can.  The two meet while Jasmine’s fiancee is out of town, Dallas the pursuer, Jasmine reluctant yet feeling something she’s never felt before.  So begins a quick and wild affair, but with love hovering just outside the walls they have both build to keep from getting hurt, from getting too deep to ever escape.

This story isn’t one that we haven’t seen before, but it’s told from a woman’s perspective about women, and that makes all the difference.  It treats homosexuality as no different than heterosexuality, filled with doubts and lusts and promises and experiments, showing that falling in love is a universal madness that affects us all the same.  The sex scenes in the film feel more explicit at first because they feature two nude women, but when compared to what we’ve become used to seeing, what difference does a strap-on or some pubic hair really make?  Perhaps the movie should be categorized with Love, Blue is the Warmest Color, 9 Songs, or Room in Rome, but that doesn’t exactly make it scandalous.  Unfortunately, pushing the envelope doesn’t make it tremendous either, it only gets our attention, the theatrical side has to rise to the occasion, and it just wasn’t able to.  Krill is a working actress, though not famous, but Linder is a complete amateur, and neither woman was able to command the screen other than when they were in throes.  The acting just wasn’t good enough, the moments overwhelming the characters, with no talent rising up to support the emotional weight of the story.  The film was sexy, forceful, and simple, but was never going to work with these actors on board; we’ll have to wait for Mullen to try again.