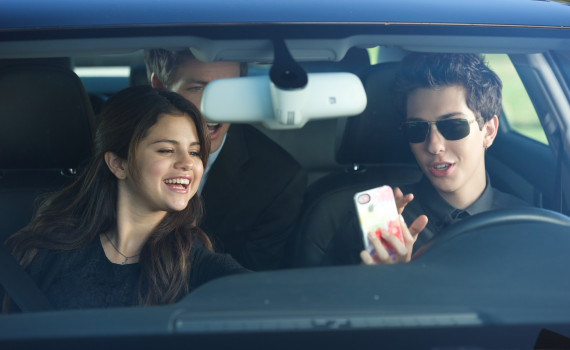 Some movies are hardly worth reviewing, and Behaving Badly fits that description.  When I sat down to watch it, I thought I was in for a typical late night comedy; a little raunchy, some prat falls, a ridiculous adventure, off-beat humor, the norm.  It sure seemed like that kind of set up, with a teenager going after the girl of his dreams, his best friend/sidekick at his side, hot moms all around, run-ins with criminals.  But either they forget to put in the humor or I just haven’t watched one of these since I was 13, cause something failed miserably.  So now I’m left reviewing a film that can hardly be called such, a project that was more skit than show, a movie that stole from a dozen others and never left anything original behind.  Basically, a disaster.

Rick Stevens just wants love, but it don’t come easy.  The girl he sees as perfection is Nina Pennington, the smartest girl in the whole school, and probably the most beautiful.  He’d work up the nerve to ask her out if she didn’t have a boyfriend, if his sister weren’t a stripper, if his mom wasn’t an alcoholic, if his dad wasn’t sleeping with everyone in town, if his weird best friend were any help at all, and if his BFF’s mom wasn’t such a controlling cougar.  Oh yeah, and then there’s this crooked priest, the Lithuanian mafia, a psycho strip club owner, and a spirit who follows his around, calls herself Lola, & looks like his mom.  Yeah, Rick’s life ain’t easy, and making his dreams come true will take some hard work and some unbelievable luck.

What a mess.  It’s a story that makes zero sense and never feels watchable.  There are too many characters, too many plot lines, and not enough substance to even make a passable movie.  I’m not saying it has to be an award-winner, but even a comedy can have a story that’s somewhat sensical.  They tried to do too much and forgot to make the movie funny, to make it a late night romp that is at least entertaining.  Instead, it became a spoof on other, much better films.  Ferris Bueller, Weird Science, Risky Business, American Pie; basically any movie about being a teenager was ripped off and turned stupid.  The best and perhaps only good part about this film were the cameos, which were actually kinda fun.  Mary-Louise Parker, Elisabeth Shue, Dylan McDermott, Heather Graham, Jason Lee, Cary Elwes, Gary Busey, Wee Man, Puddy; who knows why these people signed up for this project, but they saved it from being the worst movie ever.