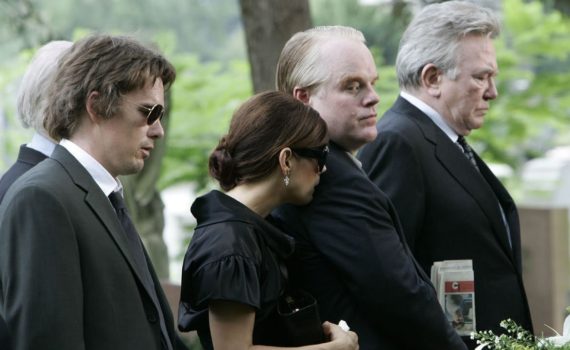 Sidney Lumet’s final film, Before the Devil Knows You’re Dead, is a doozy, and perhaps the best of his career, minus 12 Angry Men of course, which is basically unparalleled.  But other than that classic, Lumet saved his best for last, a drama that will wow you with complexity of motive and intensity of emotion, a slightly gimmicky crime-gone-wrong tale that has the acting prowess to rise above the genre.  And of course it’s always wonderful to remember the spectacular career of Philip Seymour Hoffman, a troubled genius who has gone too soon.  Combining Lumet’s imagination, Hoffman’s talent, and an excellent supporting cast produces a movie unlike few others, a taste-defining moment really, if you can catch it while you’re quite young and still wonderfully impressionable.

It seems simple enough; rob a Mom & Pop store that doesn’t have security, has way too much insurance, won’t be busy, hordes its cash, no one gets hurts, everybody wins, badabing badaboom.  But you know the saying; if it sounds too good to be true it probably is.  Or, perhaps more potent for this situation, whatever can go wrong will.  Andy & Hank aren’t exactly masterminds after all, they’re just two brothers down on their luck, secretly banging the same broad, running out of time and money.  They need this score to settle debts and to get out of town, and what’s more, they know this little old jewelry store like the back of their hand; they should, since it belongs to their own mom & pop.

Told out of order and from multiple character’s points of view, Before the Devil Knows You’re Dead is the ultimate reminder that crime doesn’t pay, especially when you’re desperate and stupid.  The alternative might not seem that nice, but robberies often result in deaths, emphasis on the plural.  Half stage play, half crime caper, all high drama, this film is storytelling at its best, and even when it feels a little like a gimmick it still works just fine.  A lot of that has to do with the talent presented, which is just phenomenal, and could carry a bloated corpse across the finish line, picking up Oscars along the way.  My critics organization even gave the movie awards before my time, so that’s cool, and all the accolades it received are more than deserved.  Hoffman is a master of his craft, Hawke is so perfectly dimwitted, Tomei is an outright goddess, and the rest of the cast rounds out very strongly: Albert Finney, Amy Ryan, Michael Shannon.  Watch with confidence and with an eye toward the dark turns the path toward hell takes us, especially when we voluntarily give up the light.