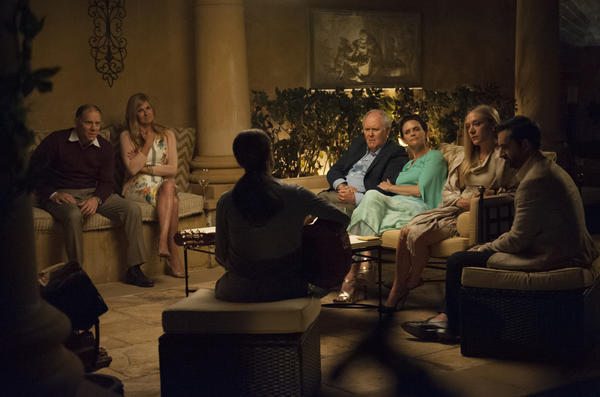 Daniel Quinn made sure to mention in Ishmael that societal collapse is a global problem, that there aren’t magical groups of wise people who know the answers to life’s questions but are keeping it to themselves, it’s just that they’ve found what works for them and they aren’t trying to force the rest of the world to conform.  He called it the inaccuracy of the Noble Savage Theory, that being one with the planet doesn’t make you a better person, that Native Americans and Amazon tribesmen don’t have all the answers, even if they have successful practices that Americans, for example, can learn from.  Anyway, that has very little to do with Beatriz at Dinner, but it struck me that the filmmakers, while trying to be poignant, fell back on the concept that doing yoga and smoothing auras is a sign that you’re one of the few that gets it, or that one group is on the pathway to enlightenment while the rest of us flounder.  It’s ironic that the film did just that, for while it has something important to say, it didn’t seem to know exactly how to verbalize the words, nor how to convince audiences to listen.

Beatriz is a healer.  She does massage, aroma therapy, Reiki; you name it and if it’s granola she does it.  She even has goats as pets, and of course she’s a vegetarian; you can go ahead and categorize Beatriz, she’s mostly an example anyway, not exactly an individual character.  She does work at the cancer center in Los Angeles, but she also sees private clients for session at their homes, especially rich clients who can pay to have her drive to their mansion.  One evening, while at an appointment with a wealthy woman who she has known for years, Beatriz’ car breaks down, and she has no way to get home.  No problem, Kathy & Grant are having a celebratory dinner party, but one more guest won’t make a difference, and they are happy to have Beatriz.  Only, Beatriz won’t be happy to meet the guests, as Doug is a famous millionaire who makes his money off of ruining the land, killing the animals, and erecting the mini-mall.  Two different viewpoints clash during dessert, and the evening will not end well.

I don’t even know if we can call them metaphors, perhaps parallels is a better term, but regardless, the meaning behind the action in Beatriz at Dinner is fairly obvious and never cares to be subtle.  The point is to make a point, after all, so why be circumspect.  The problem is, neither Arteta nor Mike White, who wrote the screenplay, are talented enough to give us the important information in a way that still smells like a quality film.  They tried to slip the medicine into the slice of ham, but we caught them; they simply weren’t sneaky enough.  Not that they would have to force feed me; I’m a Liberal, I like animals, I hate asshole millionaires, I’m with Beatriz.  But the fact that they weren’t deft in any way made the movie feel clunky, and that’s bothersome.  Hayek & Lithgow were solid, the run time was super short, so it’s all easy to swallow, if we’re staying with that analogy, I just don’t think I’d ever ask for seconds.