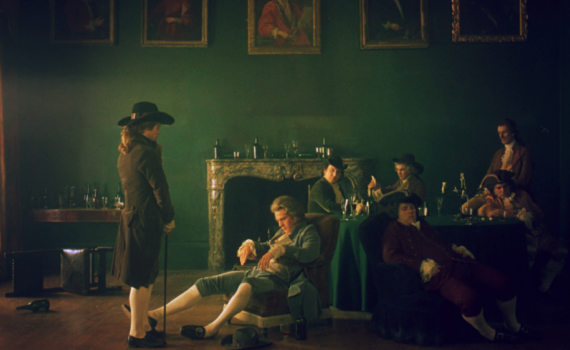 Stanley Kubrick’s 3-hour epic masterpiece Barry Lyndon is among his lesser known works (at least, once he got established in the 60s), crowded behind other films that shocked and awed.  Spartacus, Lolita, Dr. Strangelove, 2001: A Space Odyssey, Clockwork Orange, The Shining, Full Metal Jacket, Eyes Wide Shut; such a filmography as we have perhaps never seen duplicated or matched.  But Barry Lyndon might be his most beautiful, his most audacious, his most opulent, and definitely the movie that most transports audiences into a different world.  Its length and subject might deter some viewers, its scope scare them away, but, given time and patience, this is theatre at its utter finest and most literally spectacular.

This is story of how Redmond Barry became Barry Lyndon, and his journey to change his own destiny without the help of God nor grace.  Redmond was born in Ireland, and when his father died his fortunes fell.  Tripping into love with a cousin who was herself determined to marry a British army Captain, Barry found himself on the run, a fugitive from justice and a man without a penny.  So he entered service and fought, well, if not bravely at least cleverly, turning every opportunity into a chance to advance himself.  His goal was to become a lord, a man of property, a man free to make his own choices, and he was willing to do whatever dastardly deeds it took to make that dream a reality.

First, this story is simply a time capsule, a peek into the frivolous lives of the rich of the mid-to-late 1700s, but also a look at the world that they saw as far beneath them.  Barry experiences all the highs and lows of society; duels, robberies, the army, the court, gambling, carousing, gaining power, losing wealth.  We live it alongside him, and we get to know the period in a way few films have been able to show us before, which is simply an astonishing feat of this story.  Second, Kubrick directs an artistic masterwork here that has few competitors, a lustrous painting that is a priceless piece all itself.  Every scene seems stroked by hand, every outfit selected after months of consideration, every powder placed just so.  It’s a cake you dare not eat, and a film that few would even be capable of trying to match.  That Kubrick could make much darker versions of his art form only serves to make this one stand out, as you can feel the vibrating restraint throughout.  To love it, I would have preferred a touch of that bloody darkness, more violence and less harpsichord, or perhaps only a slightly less lengthy run time, the action collapsed down upon itself in a way that made every scene complimentary instead of singular.  In that way, a modern take like The Favourite sits slightly better with me, at least until you remember that it owns so much to those that have come before, like Barry Lyndon, a film that will never come again.