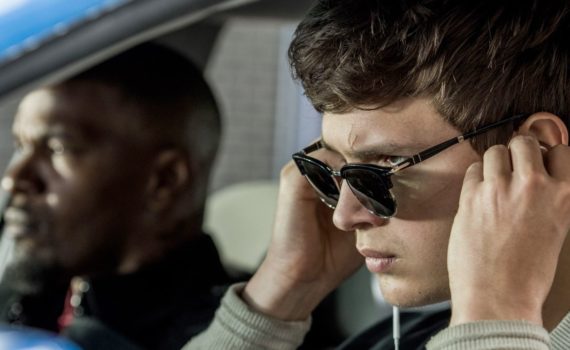 Heist movies are a strange breed, a mix of action and comedy that’s hard to sculpt into something resembling the form you first imagined.  It’s one of the toughest genres for directors to get right, at least in so much as pleasing both audiences and critics, and in creating a final product that is as cool as the original idea that launched an entire team of professionals toward making your vision a reality.  The work that goes into making any film is almost unbelievable, but I have to imagine that bringing a story like this to the screen offers a unique set of challenges that is cinematically unmatched.  If it sounds like I’m looking for a reason to give this film an excuse or a reason for not living up to my expectations, that’s exactly what’s happening.  Baby Driver was one of the movies I was looking forward to the most this year, and while it doesn’t completely disappoint, it also doesn’t perfectly deliver.

Baby is a driver, but that’s not the beginning or the end of his story.  Orphaned after a car accident, Baby grew up with an aging foster parent, a deaf man who quickly became a father figure, but also someone who needed taking care of.  Baby already loved music, but after the accident, a constant ringing in his ears led to an obsession with tunes, so a soundtrack backs Baby’s daily life.  Indebted to a local Atlanta mobster called Doc, Baby drives for robberies, and he’s the fastest thing on wheels this side of the Mississippi.  But he gets in over his head when the jobs lead to killings, not just heists, and although he’d like to leave the criminal scene far behind, he just can’t seem to drive away.

Baby Driver is a quirky combination of Drive and Guardians of the Galaxy, an underbelly drama with comedy and music thrown in for kicks.  At times, it’s almost a copy of those two films, laying them over each other and trying to convince us that this plot is something entirely new.  It’s a bit recycled, a bit standard, somewhat genre in the way it lays the action out, but that’s not even to its discredit; heist movies have a certain flow.  It can’t match Drive for intense darkness, it can’t beat GOTG‘s level of entertainment, so it settles for something in the middle, a cool take on the regular recipe with a few new flavors thrown in.  The most original element is the music, Baby providing the film with a backing track that is quite impressive, the movements of the characters matching the beats of the drum.  It’s a nice touch, but it does turn a little gimmicky by the end, the film itself not able to transcend its trick.

As far as the pieces go, they were probably better than the final puzzle.  Elgort was a solid hero, likeable and everyman, just a kid treading murky waters.  James is so lovely, both in looks and in personality, and her accent was actually spot on.  Spacey was an awesome villain, a multi-faceted crime boss who’s cool beyond categorizing.  And the team of crooks all played well together, with Flea jumping in for a quick cameo.  I can’t fault the actors, and I didn’t dislike the film, it just doesn’t work on enough levels to be called great.  The comedy was a nice surprise, but the jokes ran too long for my taste.  The music was smart, but it needed to drop down to a murmur earlier.  The action and driving were intense, but by the end I was done with car chases for the year.  Baby Driver doesn’t do everything right, but it’s still a chilly treat for a hot season, and something you won’t regret watching.