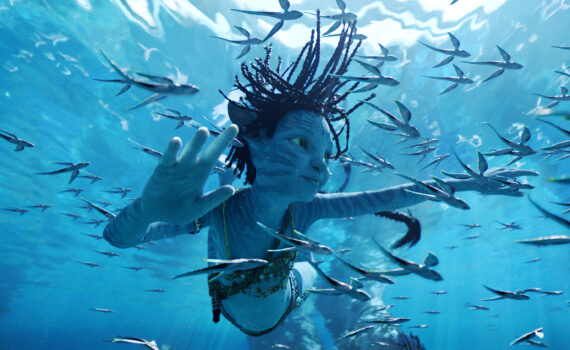 The only thing saving Avatar: The Way of Water from a one-star rating, from the bottom of the barrel, from being in the conversation with the worst movies of the year, is that it looked cool.  And even that was sometimes a detriment, when it was looking cool underwater with whales and fish for about an hour while literally nothing happened except hand signals to whale’s eye balls and connecting to a goddess on a level that wasn’t even explained.  If this sounds like I hated this movie, then I guess I’m writing it correctly; Avatar 2 is worse than Avatar 1, and that’s saying something.

About a  dozen years have passed since Jake Sully discovered the wonderful world of Pandora, and subsequently let his human body die so that he could live & love in a blue body of a native.  At first, things went really well; marriage, kids, adopting a miracle baby born from a corpse, playing with a feral Earthling who wears dreadlocks, a mask, and a loin cloth.  But all that loveliness soon ran out, when the evil Space Invaders made their return, this time hunting Sully personally, with an old enemy at the helm.  Will he fight, run, or hide, and will his life ever be “normal” again? ‘Bizarrely bad’ might begin to describe this film, but it won’t cover nearly enough.  Rewind to the first one, which was awful, and try to wrap your brain around how nobody understood that.  People were mesmerized by the technology and the visuals, I get that, I felt it too, but behind the computers was a story that was plain pathetic, with acting and accents and recycled ideas that were offenses they were so bad.  Horner with the same music he’s done a dozen times, Cameron with the same ascetic, Weaver with the same no-talent-at-all; it was abysmal, saved only by the spectacle.  Fast forward to Way of Water and everything is amplified, from the laughable dialogue to the amazing optics, and everything in between.

First, everyone is back from the dead, kind of, and that’s not acceptable, since it makes the first movie moot.  Second, they leave the forest, which is like leaving Pandora, and that takes that magic away, which is just dumb.  What follows is three hours of pretty shots of computerized water that get old very fast, and a plot that revolves around the most annoying teenage aliens you could ever imagine, cutting out the main characters in a way that is almost unfathomable.  The last battle scene might save a lot, and of course so do the gorgeous visuals, but they can’t make you forget all the whales, all the angst, all the wasted lines, all the blatant allegory, all the shiny crap that’s marketed as pure gold.  This is a very bad film franchise, just two awful episodes, and I haven’t even delved into the characters saying things like sick, dude, & bro every five seconds; there’s simply not enough time to explain why this movie sucks.