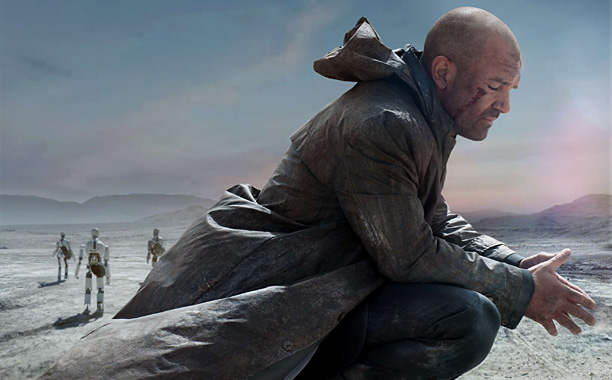 It’s amazing how much Isaac Asimov still influences the world of robotic sci-fi.  And I guess by “influences” I mean that he wrote everything we need to know about artificial intelligence 60 years ago and it’d be impossible to make a movie in the genre without essentially ripping him off.  I, Robot can be considered the Bible of robot stories, setting the standard for how the future will deal with AI, specifically with the “laws” that might someday govern all man-made lifeforms.  You see that in the Will Smith version of the short story, and you see it here, with Antonio Banderas as just the latest human to talk about the rules pre-programmed into the machines that we built to serve us.

In the future, the world will become uninhabitable.  The global temperature will rise, making deserts out of most of the Earth’s surface area.  Humans & animals will die off at an inconceivable rate, leaving life very near extinction.  The few remaining people will huddle together in dirty cities and try to survive, relying on robots to keep them alive.  These automatons will build the walls that protect the city and the weather balloons that create the artificial atmosphere.  The robots are built with two standard rules: do not harm a human and do not alter yourselves.  But when rouge machines begin appearing, units that are changed beyond their original parameters, someone has to get to the bottom of the mystery.  That someone is a lowly insurance agent, a man named Jacq, a man who just might decide the future of the planet.

It’s not a very original story, though that’s not all the film’s fault.  A dystopian future, the fear of AI growing too smart, rules meant to keep them from evolving too far, secrets that go above the pay grade of the protagonist; pretty standard stuff and fairly Asimovian.  The problems with the movie come when you realize that everything else is “borrowed” too.  It felt like a combination of Blade Runner and Brazil, a weird, dark, depressing future in which humanity doesn’t have much of a chance.  And then there was Melanie Griffith, who, in her ten minutes of screen time, managed to frighten us with her plastic face and terrible acting.  Antonio Banderas wasn’t much better, with his unbelievable, and often unintelligible, accent.  He ran off into the desert to figure out why these robots were so wild, only to become very confused and sick.  That’s about how I felt after the movie was over; confused, disappointed, and wishing I had just read an old sci-fi novel instead.