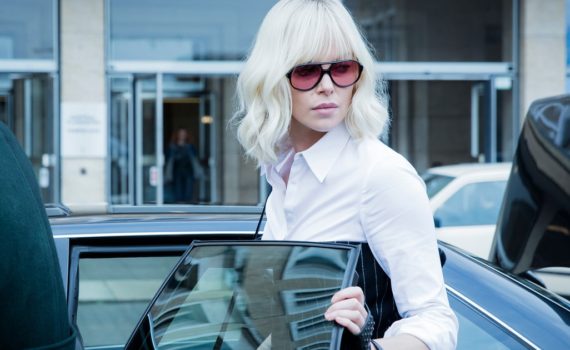 Some graphic novels work as film adaptations (300), and some do not (Watchmen), but the fact that this relatively obscure medium is becoming both more public and more respected is good for all areas of art.  Not every single attempt to bring these stories to life on the big screen is going to go according to plan, but I do appreciate the work put into both the novels themselves and their movie versions, because wow that’s a lot of effort.  Atomic Blonde is Hollywood’s latest stab at bringing a modern comic to a new audience, and credit David Leitch for moving from stunt coordinator to movie collaborator to film director; that can’t be easy.  But that doesn’t mean his new project succeeds, just as its failure doesn’t represent a big blow to the genre.  Atomic Blonde is just an idea gone wrong and a plan poorly executed; better luck next time.

MI6 agent Lorraine Broughton has been tasked with a mission of utmost global importance in the heart of Europe’s most volatile city; Berlin.  The Cold War is ending, the Wall is about to come crashing down, tensions are high, and nowhere is more dangerous, but Broughton must go where she is needed, and her country needs her at this moment more than ever.  A vital piece of information, called The List, has fallen into the wrong hands and is for sale on the black market.  This list contains the names of covert operatives on all sides and will surely only fuel a dispute that could turn into WWIII if not doused at this pivotal point.  Broughton must reach her British contact, David Percival, discover who killed the agent who was in charge of The List, find the missing info, and get out of Berlin before it explodes in protest, all while being chased by the KGB and not knowing who she can possibly trust on her own side. If I had wanted to watch Spy Game, I would have just popped it in.  If I had wanted a combination of that underrated film, Bridge of Spies, Neon Demon, and John Wick, I would have gone to sleep, dreamed it up, and discarded it as a twisted disco nightmare of espionage and vodka that no one needed to see.  Atomic Blonde is that sort of disaster; a movie version of fifty ideas spray painted on the side of a wall, shattered with a sledgehammer, and put back together by an amateur filmmaker in over his head.  From the color palette to the chapter choices, this story was presented to us in wrong ways at every turn, failing to live up to its parent work, falling flat on its face from the word ‘go’.  Too many slow shots of the stunning Charlize Theron did give us a graphic novel feel, but they also murdered the pace and tipped us off that the director wasn’t sure what else to do, that his movie was running wild without his control, and that, in the end, audiences would be the ones to suffer.

It wasn’t all bad, but the positives can only be credited for saving the film from certain disaster, not for elevating it high enough for the movie to be called ‘good’.  The music was spectacular, but we’ve already become accustomed to rad oldies soundtracks that set the mood (Guardians of the Galaxy, Baby Driver) and we’re starting to be able to sniff out when a film relies on our love of its music to get by; this movie would have been nothing without its awesomely 80s tunes.  James McAvoy tried to save the day with a role that was part Filth, part Split, and I almost wish this had been simply another one of his personalities, that the twist at the end was M. Night Shyamalan at a desk telling us that the story would continue much creepier somewhere else.  That’s obviously not true, but man I wish it was.  Because, otherwise, Atomic Blonde has nothing to offer apart from one badass fight scene up and down a set of stairs.  It’s Oldboy quality, it’s that impressive, but the other 100 minutes of action was almost anything but.  For a spy/assassin crime/thriller, the majority was a big dull drag, sprinkled with conversations that were ridiculous in dark rooms that you could barely see.  Spend your money elsewhere, support graphic novels some either time, and don’t expect Fury Road‘s Furiosa to make much of an appearance, or you’ll be very disappointed.