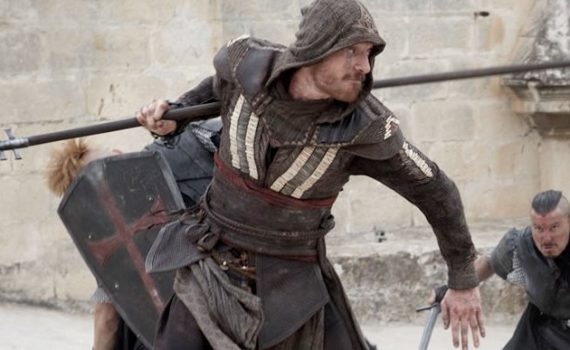 Based on the hit video game series, Assassin’s Creed was guaranteed cool, if not guaranteed good.  I’m not a gamer, but if you’ve ever even found yourself near someone playing one in this series, you are immediately drawn in, both by the stunning visuals and the clever backstory to what is much more than a simple first-person shooter.  The jumping, the sneaking, the knives, the history; it’s a smart game, something designed to suck in fans of multiple genres and even non-gamers, an action franchise that deserves its due credit.  Now there’s a movie, and it’s pretty awesome, but it’s also pretty regular, an unimaginative adaptation of the series that needed to be made but could have been made much better.

Criminal Callum Lynch has been on the run his whole life, dashing away from a murdering father, a haunting past, and his own demons.  But it’s all finally caught up to him and he’s about to be killed.  Actually, he is killed, as far as anyone knows, although he wakes up in a research facility that needs him as the final piece to a centuries-old puzzle.  The Templars have been searching for the Apple of Eden time out of mind, fighting the Assassins for possession of what could give control over humanity to whoever holds it.  Now, a science team wants Cal to enter into a machine that will send his memories back into the past so that can see the world through his ancestor’s eyes, a man named Aguilar, the hero who send the Apple into a new land so that the Templars would never find it.  Which side is good, which side is evil is something Cal will have to figure out on the fly, as well as just what he can do with his newfound memories and newly-acquired powers.

There are two sides to this film: the badass assassin memories and the stupid real world dramatics.  When we are in the past, in Inquisition Spain, things could not be cooler.  Tattooed Assassin’s, the Templar kingdom, secrets to die for, princes to rescue, odds to defy; it’s as cool in film form as it in in a video game.  The only negative there is the CGI, which just looks plain silly at times,  but I guess that should be forgiven, since real life can only mirror XBox so closely.  But it’s the present day stuff that ruins the magic, at least because it isn’t done very well.  The other assassins who are ready to fight to break out of their prison, the evil scientists, the budding pseudo-love story; it feels more like an awful television episode and less like an awesome action film.  Assassin’s Creed gets some right, some wrong, and ends as a watchable flick for its entertainment but not for its quality.