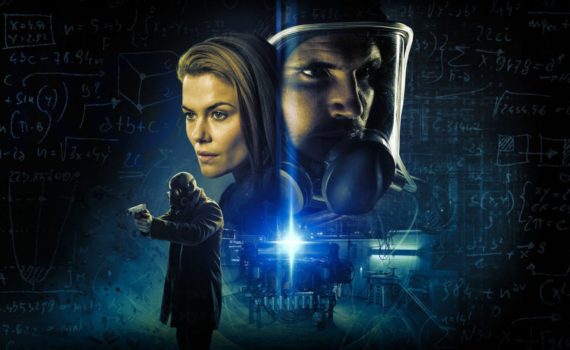 Time-travel films are a dime a dozen, and yet we are constantly thirsty for more.  Well, at least sci-fi nerds are, and that’s who I assume I’m speaking to with a review of ARQ, Netflix’s newest original film.  So if you, like me, dig sci-fi and find yourself drawn to those of the genre that play with time itself, then ARQ is something you are going to want to see.  Not only does it feature Edge of Tomorrow time looping and Matrix futurism, but it also displays a heavy dose of horror, with a little romance thrown in for good measure.  That’s a ton of styles to be supported by one small, semi-amateur film that was produced by a fledgling distribution company, but somehow the trick triumphs, and we’re left simply to enjoy.

A great war will soon ravage the world, with an evil corporation called Torus being the main player.  A resistance called the Bloc will fight against Torus’ complete domination, but as food & power become scarce, humanity’s only option is to submit.  Foragers search for any money or edibles they can find, all while the doomed underground movement continues to survive, if just barely.  Renton, who used to work for Torus, is the keeper of a machine that will either save the world or become the weapon that destroys it, a power source that renews itself, free energy for Earth.  But Renton and his long-ago love Hannah wake up to find armed men in their house, a morning that seems to repeat itself each time one of them dies.  The couple is stuck in a circle of time that restarts itself, fed by the ARQ, posing unanswerable questions, and opening up unimaginable opportunities.

Neither as smart as Primer nor as twisted as Timecrimes, ARQ is still a time-travel film worth your, well, time.  Its simple plot and closed-circuit set are the perfect breeding ground for chaos, producing a story that gets more complicated each time the main characters wake up and have to die again.  The film takes the time to go over the details, squashing plot holes, and keeping audiences interested.  It also feeds us background information by slow leak, letting us in on the current world one reference at a time, something that can be infuriatingly challenging but also much appreciated by the end.  Part sci-fi part horror, ARQ is quick, exciting, intriguing, and should be pleasing to those who love this genre and want to love its lesser-known members.