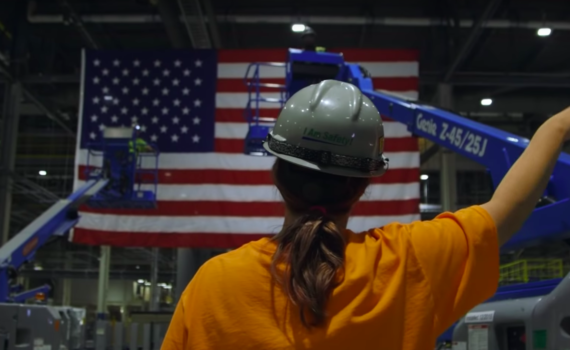 Nominated for Best Documentary at this year’s Academy Awards, American Factory is an exploration of the modern workplace, where individual rights clash with corporate goals, with the wage-earner smack dab in the middle.  This is one of the few documentaries I’ve seen this year, I guess I never see a ton, but I’m glad this one caught my attention, and I’m glad I gave it a watch.  It’s personal to me because it was filmed in my home state of Ohio, and features my elected officials, but it should also be a story that resonates with workers all over the country, and maybe all over the globe.  That’s a major storypoint in the film; how the US workforce is affected by overseas investors & corporations, and how we all interact to create a landscape that balances efficient production with personal well being.

In 2008 in Dayton, Ohio, GM closed a major auto facility and put thousands of workers out of a job.  The area depended on this factory, its blue collar workers had few other options, and so the impact was felt mightily and personally.  Fast forward to 2014, when a Chinese auto glass manufacturer, Fuyao, bought the empty space and set up its own well-oiled machine, creating good jobs for the area’s residents and pumping out product to car companies all over the world.  But the transition from GM to Fuyao wasn’t exactly smooth; the language barrier, differences in working conditions, a strict “Chairman” overseeing all operations.  And when whispers of a union began to circulate, many lost their jobs for simply sympathizing with those who wanted to join the UAW.  With a unique perspective on this increasingly common international partnership, American Factory quickly becomes a must-see.

What a fascinating documentary, presented so informatively and without much bias, rarely do we even hear the interviewer/narrator/director as they watch events unfold.  There is a tilt perhaps toward unionization and worker health, but that’s fine by me, I think that’s important, and I challenge anyone to watch this film and come out thinking otherwise.  There’s little blame here; even the Chairman gets a side of the story, building a business that he hopes will succeed, contemplating the value of factory after factory until, what’s left?  And the comparison between American and Chinese worker is so curious, painting so many differences and similarities, showing us all as one group trying to succeed in balancing being useful and being happy.  Finding a middle ground isn’t easy, and it’s a fight being waged currently all over the world, in every office and factory, but documentaries like this help us understand the problems better, and, hopefully, can help us solve them.