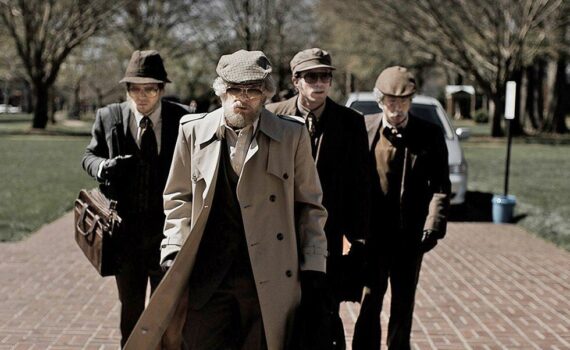 American Animals is, what, a docudrama?  It’s a true story acted out, interspersed with interviews from the actual people, sometimes told from a couple viewpoints because who the hell knows what really happened anyway.  Whatever it is, American Animals is surely a unique approach to the “based on real events” genre, and offers us truth while also guaranteeing entertainment.  From any angle, this is a cleverly-made and never-boring caper story that takes on a life of its own above the real life drama, and that double layer is very appreciated; the result being a grand film that works whichever way you want it to.

In Kentucky, at Transylvania University, a young man feels lost in his pointless life, awaiting something amazing to show him what the meaning of existence is; hey man, join the club.  He’s not unusual, he’s just bored, and that boredom leads him to befriend a troublemaker, and that troublemaker leads him to the worst idea of his life.  At the university, in the rare books section of the library, there are volumes worth millions of dollars, and they are barely guarded in any way.  So …why not just take them in broad day light while dressed up like old men and walk away as millionaires.  With such a simple idea, how could it go wrong?

This really happened, which is hilarious, because, wow, what a bad idea.  This bunch of knuckleheads decided it was way too easy to just take the books, they had fun making up a silly heist, but then they actually pulled it off …kinda.  It’s wild and goofy and head-scratching; what an awesome tale to tell.  And somehow, though it could have turned boring, the film never is, it’s always high-engagement and high-drama, maybe because it focuses on the honest feelings these boys were having, cause they weren’t bad kids, they were just angry and dumb and lost.  The interviews are entwined excellently, I was always curious, it didn’t feel like a moronic podcast, the acting was spot on, and wow was the music phenomenal.  A film for the young who have never felt defined, and much like The Social Network, American Animals is simply great.