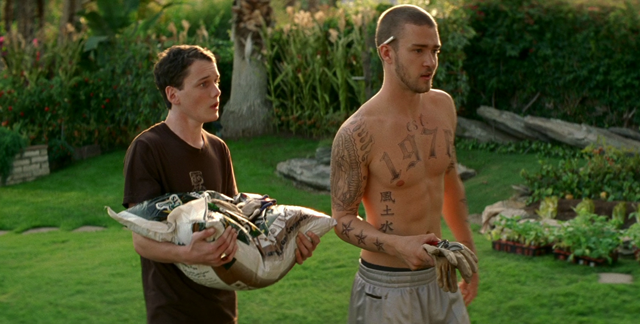 When the who’s who element of your film becomes the focal point and the plot splinters into a thousand pieces in the background, you know you’ve made a mistake delivering your message, and your movie has just become a missed opportunity.  Alpha Dog has a great concept, nice cast, is a cool experiment, uses a gutsy style, but then fails to come together as one solid product, and so the fact that there are a million celebrities in every scene becomes the only reason to watch, and that’s just not good.  I wanted to be a fan, since I missed it when it came out over a dozen years ago, but I simply couldn’t; there were too many obvious pieces going wrong, the scales tipped, and anything solid that could potentially have been build fell apart before it really had a chance.

Johnny Truelove runs a small gang of goofy drug dealers who worship him as a god, at least as long as he provides the drugs, the money, the girls, and that rock&roll lifestyle.  He’s young and kinda bratty, but people do what he says, and they all get to smoke weed and bang chicks, so no one’s complaining.  Except Jake Mazursky, who has a deal turn sour and then gets railed on by Johnny, who thinks he’s being mouthy.  Jake begins to terrorize Johnny, like stupid children in a schoolyard, expect these kids have guns.  The result; Johnny kidnaps Jake’s little brother Zach when the opportunity presents itself, because he wants a little damned respect and attention!  Well, he’s got Jake’s attention now, and a war between gangs is about to break out; California Dreamin’ not so much.  So Johnny gets his pal Frankie to babysitter the comfortably kidnapped Zach, but the pair become friends somehow, further complicating a situation that slid irreparably sideways a long time ago.

Nick Cassavetes is a bad director, which may have been the only real reason that Alpha Dog bombs when you ignore the star power and the shock value.  John Q, The Notebook, My Sister’s Keeper, The Other Woman; ouch those are some bad flicks, basically embarrassingly terrible.  Alpha Dog, though different, isn’t really much better when you watch it with a wary eye, mostly because the direction is absolutely awful, with scenes and moments and edits and plots that go nowhere, do nothing, and make so sense.  Cassavetes created something really REALLY messy, a drama that is all over the place, and never stays still long enough for us to really watch, which, you know, might have been a ploy since maybe the meat of the movie wasn’t great either.  The actors are mostly great, or would be some day, I just don’t think any of them really worked like they were supposed to: Timberlake, Yelchin, Hirsch, Ben Foster, Bruce Willis, Sharon Stone, Harry Dean Stanton, Olivia Wilde, Amanda Seyfried, Amber Heard, Alan Thicke.  Timberlake wasn’t even an actor yet, this was his first real role, he’d follow it up with a lot better with Black Snake Moan, but it’d be a while until he really figured out what he was doing: The Social Network, Inside Llewyn Davis, Trolls.  Anton Yelchin I will always love, Ben Foster is a god, but everyone else kinda sucked, and so did the movie in general; it was forced and frantic, which is a not a strong combination.