Movie Review – All Quiet on the Western Front 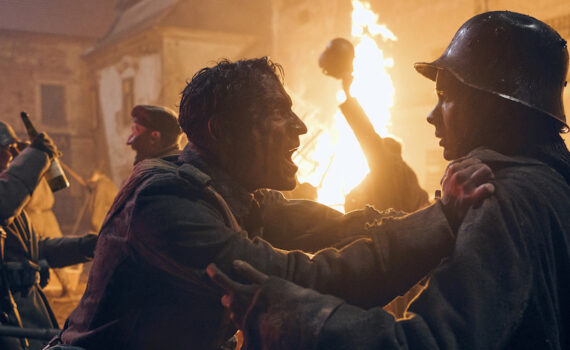 Movie Review – All Quiet on the Western Front

Based on the famed novel, set amid the trenches and countryside of World War I, All Quiet on the Western Front is a film that brings the page to life like few have done before, transferring art to art in a seamless and engaging manner than will leave audiences breathless.  It is one of the very best of 2022, and also one of the greatest WWI depictions you will ever see, showing not only the horror of battle but the hopelessness of war itself.  Come Oscar season next Spring, this will be a picture to have watched and to remember; its unique brutality and honesty won’t go unnoticed.

Paul Baumer is a young German student who is excited and honored to join his country’s armed forces and to fight for his Fatherland.  But his experience in the trenches casts warfare in a different light.  The mud, the rats, the fear, the death; men kill each other to gain yards of territory, only to lose it the next day, in an endless madness in which he & his fellow soldiers slowly lose their dignity & their minds.  As political officials debate over treaties, young men freeze, scavenge, and die for absolutely no reason, as that absurdity becomes the way of a very short life.

1917 caught our attention when it came out two & a half years ago, but not only for its story, but for its style, its director, its tricks, its cinematic prowess, all it brought to the table.  Western Front is a different kind of film, less of a spectacle and more visceral.  It’s transportation into the thick of the fight, and it’s a quick reminder that that’s anywhere but where we want to be.  Paul is our vehicle, so young and so clueless, but he quickly ages into a shell-shocked veteran, having to live the same god-awful clash day after day, with gaps filled in by hunger, boredom, the cold, and the terrible realization that he & his brothers-is-arms have been abandoned.  This is a brutal story, told so well, and brought to life with such truth that you’ll want to shut your ears so you don’t have to hear it.