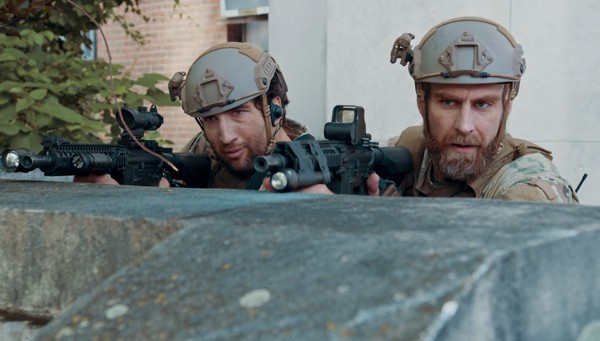 I’ve seen my fair share of terrible b-movies, and I have to say, I’ve seen a lot worse than Alien Warfare.  I know one of the original writers, although his script was basically overhauled in the rewrites, but it’s still cool that he has a film to his credit now, and it’s available on Netflix, so it should get some views, regardless of its general straight-to-video quality.  But, again, I’ve seen worse, especially in this genre; special ops soldiers encountering aliens, fighting for their lives, in over their heads, rescuing damsels, you know the drill.  Alien Warfare at least knows that it’s over-the-top, and that’s the first element to a great bad movie, one that understands its scope and ceiling, and knows that it’s no good.

A team of Navy Seals has been assigned to a dangerous mission; infiltrate a top secret base, find out why the top secret scientists who worked there disappeared, recover the top secret experiment they were working on, and get the hell out of there.  Chris the LT, Mike the hothead, Jonesy the Medic, Thorpe the tech guy; this crew has worked some shit assignments before, but this one might take the cake.  Especially after they reach the site, find one woman alive, and realize that what they’re up against is alien.  That’s right, alien technology, when these Seals have been training against the worst humanity has to offer for years; now all that’s out the window.  The rules of engagement have changed, and they might not survive this freaky firefight.

I’m not kidding; I’ve seen SO much worse.  At the very least, these actors could mostly act, and I felt like a few of the people involved in this film might actually have had some awareness as to the kind of silly, explode-y, alien-y footage they were capturing, that it wasn’t wonderful, but that it was also kinda fun.  The team worked well together, the plot was enjoyable, the run time was short, and while we usually get a ton of boobs and blood with this kind of feature, it really would have been unnecessary, so I’m glad they held back.  There’s a difference between letting loose and jumping the shark, and this film walked that thin line rather well, only wavering a little, always pulling back just in time.  Don’t watch thinking that you’re about to see Annihilation, because duh, but for a low-budget sci-fli flick, Alien Warfare didn’t embarrass itself.