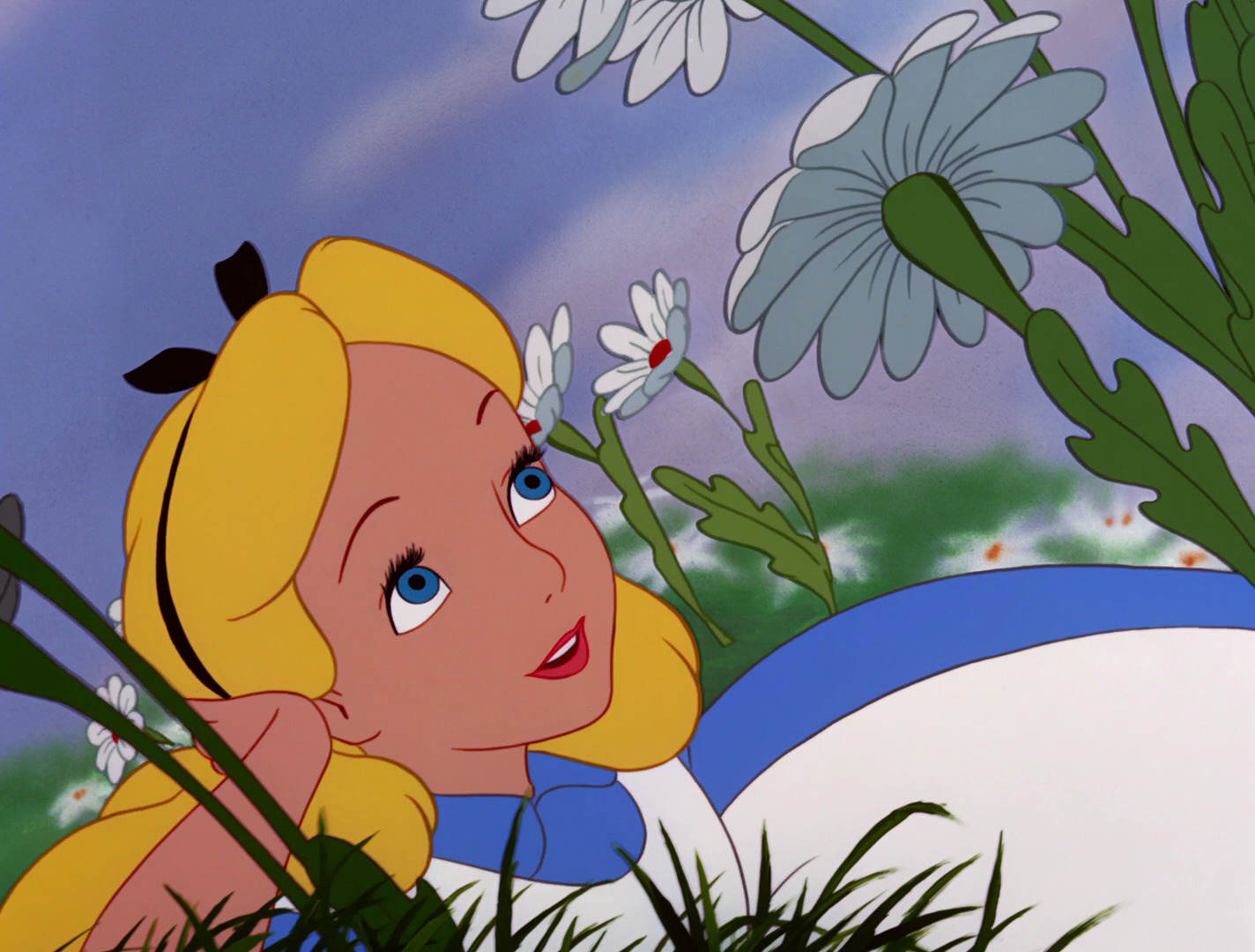 There is not a trippier Disney movie than Alice in Wonderland.  Talking animals, talking plants, talking playing cards; everything speaks, everyone is insane, and everywhere Alice goes she is met with nothing but nonsense.  And it’s her own fault, really, since she’s the one who wanted to imagine a world of make-believe, a place where nothing is what it seems.  Based on Lewis Carroll’s classic book, this film takes us on a wild ride through a fantastic land of imagination, but also of deep satire as well.  It’s a children’s movie at its core, a fun adventure in a crazy country.  But what makes it great are its metaphorical meanings, an added bonus that adults can enjoy while watching right along with their children.

Alice is daydreaming, per usual, and talking to her cat instead of paying attention to her lesson.  She wishes that the world were more vibrant, more lively, that opposites were true, and that every tiny creature had a story to tell.  And so, as she begins to doze in a meadow, her thoughts become her reality.  A white rabbit speeds by lamenting its lateness, heading down a hole to who-knows-where.  Well, Alice wants to find out, especially since she’s never met a talking rabbit in a waistcoat before.  Her curiosity is about to get her into trouble, as she tumbles down the rabbit’s hole into a world that is completely foreign to her.  In Wonderland, flowers sing, lizards are chimney sweeps, food makes you grow or shrink, lunatic companions celebrate unbirthdays, and the Queen of Hearts rules all.

What makes Alice in Wonderland so fascinating is the amazing representation of the classic story, how Disney brought to life one of our favorite books with a skill that has been copied often but never duplicated.  This is a unique take on a unique novel, bringing kooky characters to our living rooms in an iconic way, from the Cheshire Cat to the March Hare, the Mad Hatter to the bossy Dodo.  And what’s more, these characters mean something, represent ideas, are politically satirical, and are critiquing our existence with their mere presence.  And let’s not forget the music, which often gets overlooked, since Alice is not a Disney Princess belting ballad sort of movie.  In a World of My Own, I’m Late, The Caucus Race, The Walrus and the Carpenter, Golden Afternoon, A-E-I-O-U, The Unbirthday Song, Very Good Advice, Painting the Roses Red; how many Disney movies have this many strong tracks, songs that stick with you no matter how old you become?  Alice in Wonderland is known as a centerpiece of Disney’s works, and yet it seems to be under-appreciated by today’s audiences.  Don’t let this gem go forgotten; you’d be missing out.