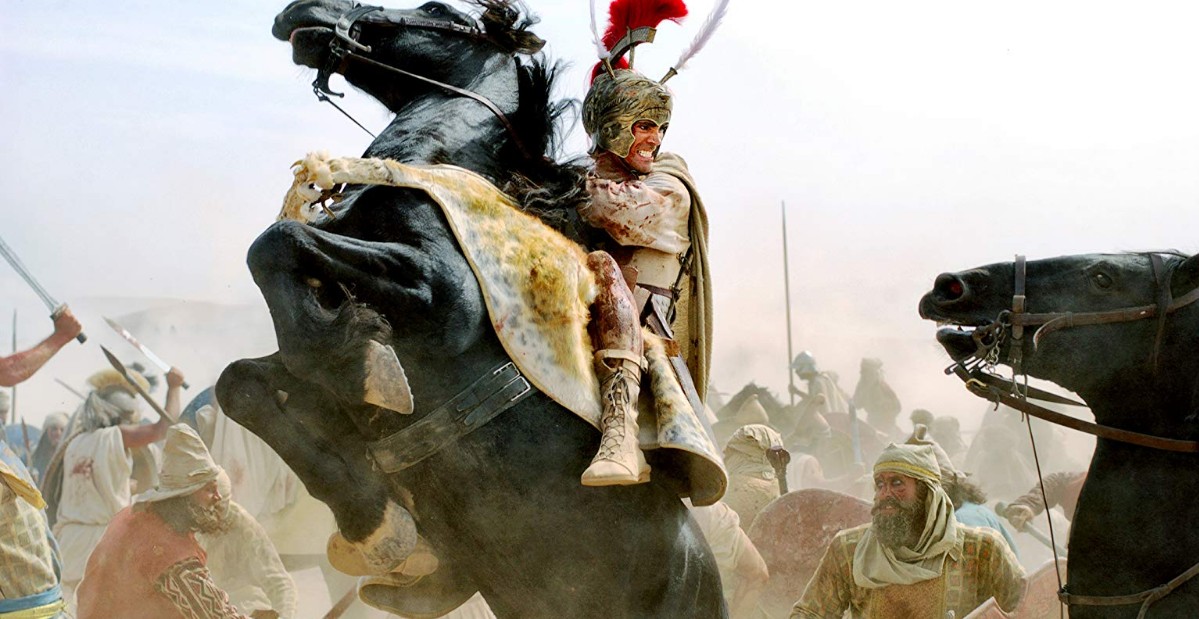 It’s hard to explain why Troy is so lovely and Alexander so hideous; they were both made the same year, as pairs of films often are, the former came out first, but the latter was the obvious failure.  Critics will say that Troy is silly and overdone, and I don’t exactly disagree, but I love it for its audacity and vigor, for going full force in our faces, with stars galore and blood aplenty.  Alexander seems to attempt the same, with a little more history behind it, but it also tries to be clever, and that’s where it meets its demise.  Actually, demise was around more corners than that; just hearing the actors speak is enough to send audiences running for the hills before their brains explode, and that’s not something you want from a drama, nor are ugly action sequences what you want from a war movie.  Alexander is a combination of reality & myth, but melded so sloppily that you’d have to imagine everyone involved would ask for a do-over, if only the gods would honor their guilty request.

Philip, the King of Macedonia, takes a barbarian wife, and she bears him a beautiful son named Alexander.  Once Philip conquers the rest of the Greeks, he turns his attention to the East, to Persia, the greatest empire in the world.  But before he can begin his dream quest, Philip is assassinated, and Alexander takes the throne.  Driven by dreams of global dominance and an urge to see the ends of the Earth, this great leader takes his armies into the heart of Persia, conquering, discovering, annihilating, and leaving home behind.  Alexander would become Great on this journey, by these bloody quests, but the price was high; a life of loneliness, a constant state of paranoia, a near-tyrannical hold on hundreds of thousands of lives, and, ultimately, an early death.  Like his hero Achilles, Alexander chose glory over old age, fame over luxury, and burned like a fire for the briefest of periods so that he could be remembered far longer.

It’s hilarious that they simply made all Macedonians speak with an Irish accent so that they would all sound like Colin Farrell.  Angelina Jolie did some sort of Russian variant, Rosario Dawson did maybe a Gypsy, and no one else did anything even recognizable enough to be labelled.  Alexander might be the worst accent job I’ve ever witnessed, a complete mess of voices and sounds that only served to make the movie even worse than it was destined to be anyway.  I know Braveheart isn’t perfect as far as accents go, you could say that Troy is problematic too, but this film takes the cake, and it doesn’t stop there, oh no, it keeps going in the ‘wrong’ department.  Oliver Stone exhibited about as much deft workmanship as a giant, square lump of gray clay, wielding direction and editing like they were weapons, not tools, giving us a pile of crappy pieces, not a whole, enjoyable experience.  The filming, the editing, the music, the trippy stuff, the breadth; bad, bad, bad, so bad, and bad again.  It was like he was intentionally doing something to hurt us, and so were the actors; everyone involved should be embarrassed.  They tried with the history, I’ll give them that, they tried to make us understand the size of what happened, the significance of the battles, the toll that time took on those who should have been heroes to some, murderers to others.  But overall, Alexander failed to be cinema, becoming sensation instead, and only in an undesirable way.