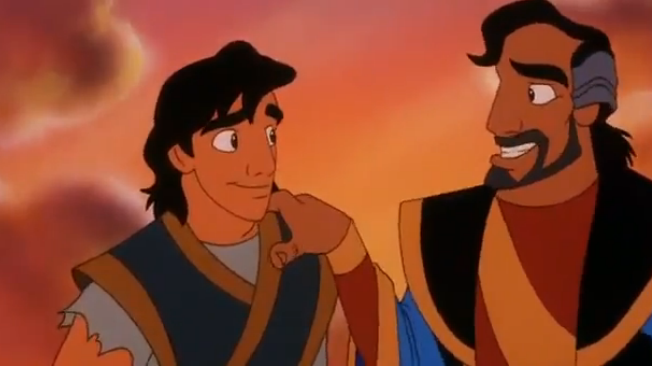 We can skip right over Return of Jafar, since it doesn’t have Robin Williams in it anyway, and go right to King of Thieves, because at least it feels like a Disney movie, if a sub-par, farmed-out sequel that you should lower your expectations before watching.  It’s no Aladdin, obviously, but at least it’s an attempt, and gives families (especially the younger members) something to experience in a free and easy manner, with enough quality to get by in a pinch.  The death of Robin Williams is one of the saddest events of cinematic history, but at least we get to hear his voice and enjoy his comedy in this film, and that’s almost reason enough to watch right there.

Jasmine and Aladdin are finally going to be together forever and get married, after all the adventures they’ve gone through as a couple new to love.  But their wedding is interrupted by the King of Thieves and his band of criminals, who are amassing the world’s largest treasure trove in a secret cave, and have their eye on one special magical item that will keep the King wealthy forever; the hand of Midas, which turns everything it touches into gold.  Aladdin finds himself in the mix when he learns that the King is his long lost father, a journeyman who has been searching for years for the means to make his family proud.  Now, father and son will have to work together to reach their goals, learning along the way that blood is more important than gold.

There are a lot of strong points about King of Thieves, but its ceiling was built so low from the beginning that there’s really no reaching any surprisingly strong level.  The true and legendary voice of the Genie is back, for one, and that makes all the difference.  His songs and jokes aren’t quite as crisp, but they’re still entertaining, because of course they are, Robin Williams was both a genius and a gem.  The music isn’t great, it’s patchy, and it feels second-rate, probably because that’s exactly what it is.  Even the animation takes a step back, but at least the characters are still cool, Jerry Orbach plays a good villain, there are some fun themes, we get to meet Aladdin’s dad, so it’s not all bad.  My kids had a good time watching, that means something, so it’s not all a loss, and at least it’s better than the live-action remake.