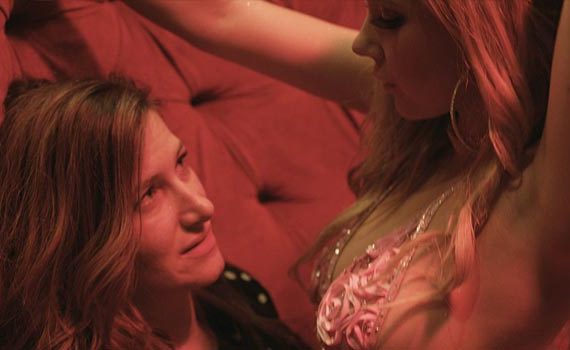 Talk about a downer; Afternoon Delight might be the most depressing movie I’ve ever watched, and that includes some real, tragic, bloody, abandon-all-hope doozies.  It feels that way because there aren’t enough redeeming characteristics exhibited at any point to bring audiences out of the funk we’re intentionally thrown in, making the whole story feel forced instead of honest.  At least Hamlet felt like it was honestly saying something, though everyone dies before they can really realize it themselves.  This film isn’t nearly as bleak, it even has a happy-ish ending, but that doesn’t matter; it’s dishonesty and complete lack of real-world perspective sends it into a tailspin that it definitely doesn’t have the talent to recover from, the result being a movie you’ll wish you hadn’t seen.

Rachel is tired of going to Jewish Community Center fundraisers.  She’s tired of doing the drop off/pick up thing at preschool.  She’s tired of being a housewife with nothing to do.  She’s tired of a husband who’s too busy to notice his family.  She’s tired of never having sex.  She’s tired of her therapist talking about herself more than she helps Rachel with the dozens of problems that are spiraling her life out of control.  Basically, she wishes she could start over, or at least add something interesting to her existence, and that chance just might come, when Rachel and her husband Jeff visit a strip club and meet a dancer named McKenna.  She needs a place to stay so Rachel invites her into her home, unknowingly inviting in a lot more excitement than she’s used to, some good & some bad; at least it’s a change, if not exactly for the better.

Afternoon Delight really bothered me, and I tried to be open to it, tried to listen to it, but I was mostly rebuffed by themes that I thought were abrasive, untrue, and forced.  There’s a certain stereotypical perspective focused on by this story, and I didn’t appreciate that; marriage and family life aren’t usually this depressing.  I know I am only myself, I know I can’t know all the secret things that go on in people’s hearts, but it’s such a cliché to make a movie about moms who hate their kids, their husbands, their money, their friends, themselves, just want to get drunk on wine, just want to have sex with anyone who’ll want them.  That’s so tired, and I also don’t think it’s the truth; it’s not some sort of American Beauty-style revelation, it’s not ballsy to show a woman peeing in front of her husband, it’s not cool to portray parents as constantly ready to get rid of their kids so that they can get hammered or smoke pot.  It’s just not honest, that’s what I keep coming back to; this film just kinda sucks, and sucks the life out of audiences, which shouldn’t be the goal.   Soloway was an amateur at the time, this was before Transparent, and you can tell, she’s not ready, and even though this story takes pieces from her own life it never feels authentic, maybe because she simply wasn’t able to tell the tale as well as was needed.  Hahn is always great, but she can also be too much; sometimes she enjoys making us feel uncomfortable too much, it’s her schtick, and I just don’t think that’s as cool as she thinks it is.  The rest of the cast was throwaway, and the film becomes that too, since it never finds the lane to which it fits perfectly, always searching in vain for another way to shock us and get in our heads, with the end result being we’d rather tune it out completely than do the work necessary to really appreciate what just might not be worth our time.