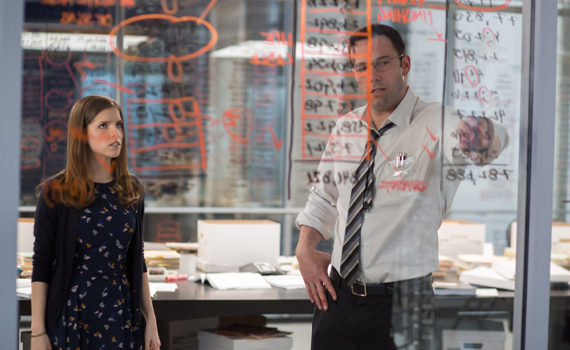 On paper, The Accountant has everything.  Although, with an opening statement like that, you know a ‘but’ is coming, so prepare yourself for that while we talk about what should have been positive about this film.  Ben Affleck is only getting better with age, more dark and brooding, more serious and dramatic.  Yes he’s also Batman, but even that is done with a certain black magic.  Anna Kendrick is America’s It Girl right now, the lovable little multi-talented actress who might make poor project choices, but always seems to win us over.  J.K. Simmons is finally being recognized as a legitimate threat, Gavin O’Connor knows his stuff (Pride and Glory, Warrior, Jane Got A Gun), and audiences are currently digging the whole assassin, government, Jason Bourne thing; when weren’t they, I guess.  So, everything seems set up for success BUT (and you knew this was coming), it doesn’t always work out that way.

The accountant in question is Christian Wolff, or whatever he might be calling himself on any given day.  Christian is autistic, has a high-functioning form, has a hard time forming relationships, but is a mathematics genius.  He’s a whiz at taxes and keeping the books of small businesses, but on the side he also launders money for giant criminal organizations, often taking famous pieces of art as payment for services rendered.  He had an odd childhood and was trained by a military man, taught to fight, shoot, and disappear like a modern day ninja.  But when the Treasury Department begins to close in on Christian’s activities, when he falls into the problems of a robotics billionaire, and when he meets a beautiful woman who he might actually be able to care about, his life veers drastically away from the order he maintains, threatening to upset the delicate balance of his psyche. Focusing on the positives first before we delve into the details of its flaws, The Accountant is what audiences are currently enjoying; violent, quick-moving, multi-charactered comedy/drama/action flicks that are entertaining first, twisty second, and focused on narrative quality a distant third.  This film has mass appeal, with a unique hero, a cute love interest, a government watchdog, a vicious villain, a bunch of jokes, blood galore, and plot reveals to keep even the most hesitant moviegoer interested.  Affleck is solid as Christian Wolff, trying his hand at autism and doing probably the best job he was able to.  Anna Kendrick is likeable as the innocent accountant who finds herself in the middle of the mess.  J.K. is a great actor, though this role isn’t exactly challenging.  And, as a whole, the film moves along nicely, will find a home in the wheelhouse of most audiences, and should do just fine.

Now for the negatives, and there are many.  Viewers with a critical eye might not find that they agree with the consensus here, of course depending on what your perspective was coming in.  If you were looking for pure enjoyment, well then you just might find it.  But if you were looking to appreciate the details, you simply might not.  An actress named Cynthia Addai-Robinson, who I had never seen before, was awful to the point of distraction as the young agent trying to crack the case.  The comedy thrown in at random was, to me, hardly ever humorous at all, while the theatre roared around me.  The story was all over the place, hatching hundreds of different scenes, going in random directions at will.  It all comes together at the end, but the plot was chopped up so badly, pieced back together so hastily, that I never felt connected to the overarching main theme.  Someone needed to edit this movie down, to contain it, to harness its entertainment value but stop it from running wild.  I can see it being popular; there’s nothing so wrong with it that I could warn people away.  But in the specifics, this isn’t a high-quality film, and expecting as much will just lead to disappointment. Anna Kendrick is listed as a positive while Cynthia Addai-Robinson is listed as a negative? Ought to be the other way around. I dont see Kendrick’s appeal.

Surprised you gave this movie 3 stars, sounds like you didn’t enjoy it much.

I liked it enough to not warn others away; it was a fine, entertaining film, but nothing great.