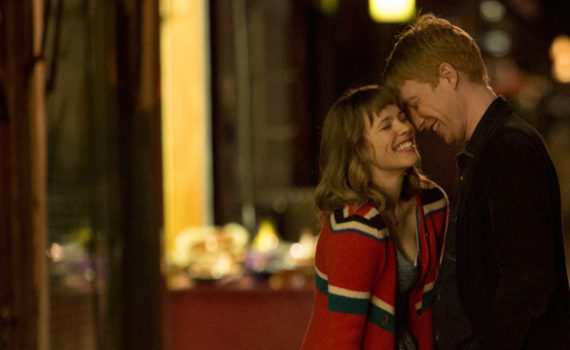 My wife saw this film in the theatre and came home saying that it had changed her life.  To say that I was skeptical would be putting it lightly.  I mean, how could a romantic comedy starring Rachel McAdams be anything more than a chick flick, let alone a life-altering movie?  Even the time travel element didn’t convince me, nor did the fact that most of the actors are British.  Perhaps I should have given it more of a chance, considering Richard Curtis also did Love Actually, a romantic favorite of mine that I watch every Christmas.  But I was still doubtful, even as I sat down to finally watch it.  Turns out the only thing I had to worry about was whether I was prepared to cry in front of my wife, as About Time might not have exactly changed my life but it was one of the most emotionally stirring dramas I have ever seen.

Tim is a gangly, red-headed Englishman who has never been anything but awkward.  He can’t talk to girls, makes frequent bad decisions, and, as his 21st birthday approaches, hasn’t got anything to be proud of except the love of his family.  But his life is about to change forever when his father reveals to him a paternal secret; the men of the family can travel in time.  Of course Tim doesn’t believe him, but when he tries it on for size he soon realizes the he can relive his own life, change the choices that he’s made, and sculpt a wonderful existence out of what has already happened.  It’s not all perfectly easy though, every action has a reaction, but Tim uses his new gift wisely; to fall in love, to help his friends, to enjoy every moment of every day.  But when tragedy strikes, as it’s bound to do, even time travel can’t fix the broken pieces of your life and erase the memories of heartache.  Tim must learn what he can & cannot mend, getting along one day at a time as we all must do.

It would be an understatement to say that this movie affected me.  It got under my skin, it bothered me in a great way, and it did make me take a look at my own life through a different lens.  About Time is a powerful movie with a lot to say.  Love, family, kids, death, sacrifice; they hold nothing back and by the end I felt pretty wrung out.  It wasn’t as amazing as Love Actually, if you’re a fan, with a little more of a sad and/or reflective note.  But it was an excellent film, filled with great music, top-notch actors, and a directing style that facilitated the mood perfectly.  To touch on the acting, every single actor was on top of their game.  Domhnall Gleeson was a good storyteller as well as a great character.  Bill Nighy was phenomenal as Tim’s dad.  And Rachel McAdams has never been better, blowing away all her other roles.  In the end the film was about the relationships between the family members, about the idea of living every day with no fear, with appreciation for the details.  It was never really about time travel; that was more a vehicle for the plot, not the focus of the story.  And in the end I cried, I felt it, it got to me.  But its hook doesn’t make it a wonderful film; it did that on its own with real emotion, honest portrayals, and a message that we all need to hear.