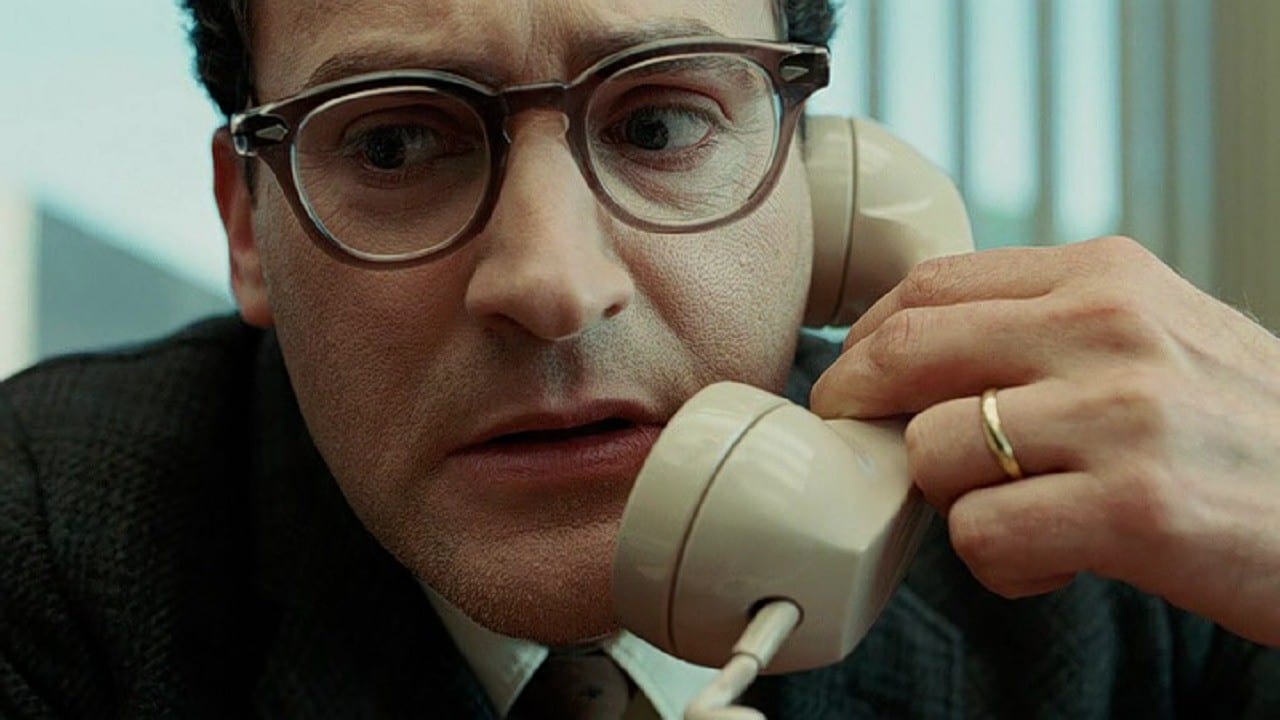 The Coen Brothers’ films can be broken down into a collection of periods: Early, Peak, Mistake, Adult, Experiment.  Those are in chronological order, and to avoid going in too deep, take a look at their filmography, you’ll see for yourself how their career has ebbed & flowed.  A Serious Man lands in their Adult Period, from 2007 to 2009, when they recovered from their lunacy in the early 2000s and got back to creating real cinema.  It’s not their best work, but neither is it near their worse, sliding nicely into their upper echelon without making too big a splash.  It’s a return to Fargo roots, proving that anything that can go wrong will, but this time the violence is toned down and internal desperation takes the stage, forcing audiences to a dark place that we try not to ever visit.

Larry Gopnik’s life is falling apart.  He is up for tenure at the college, but a bribe from a student and some nasty anonymous letters might derail his chances.  His wife has asked for a ritual divorce so that she might marry Sy Ableman, news that hits Larry completely out of the blue.  His brother, Arthur, is unwell, both physically and mentally, so he’s staying with the family for a while, and hogging the bathroom.  Larry’s son smokes pot all day, his daughter hates being anywhere near the home, Columbia House won’t stop calling to collect a bill, the aerial won’t pick of F Troop; perhaps the rabbis can help, perhaps they can share some sage advice, or perhaps Larry Gopnik is simply cursed, destined to be unhappy every day for the rest of his miserable life.

Sounds depressing, but the Coen Brothers make sure to stagger the absolutely awful with the blisteringly funny, so have no fear.  They are masters in finding the humor in the worst situations, and that talent is definitely on display in A Serious Man.  The story is set in the 60s, it’s centered on Jewish tradition, the family lives in Minnesota; the film represents the period and the faith and the location so well that you’d swear you were transported through time and space while sitting on your couch.  No real surprise there; the Coen Brothers are the best in the business.  And you know who else is incredible; Michael Stuhlbarg.  This was his first big role, and it took some time for his career to get rolling, but once it did he never looked back.  Cut Bank, Pawn Sacrifice, Steve Jobs, Trumbo, Arrival, Call Me by Your Name, The Shape of Water, The Post; good god.  He’s an immaculate professional, brings something new to the screen every time, and should be on our radar as one of the best actors working.  Stuhlbarg is the perfect Gopnik, the film is hilarious and sad at the same time, it oozes Coen Bros. style, Richard Kind has maybe never been better; if it hadn’t been for a penchant for dream sequences, which I simply can’t stand, I would have rated A Serious Man even higher than I did, and I enjoyed every other piece of it so much that I might just watch it again immediately.