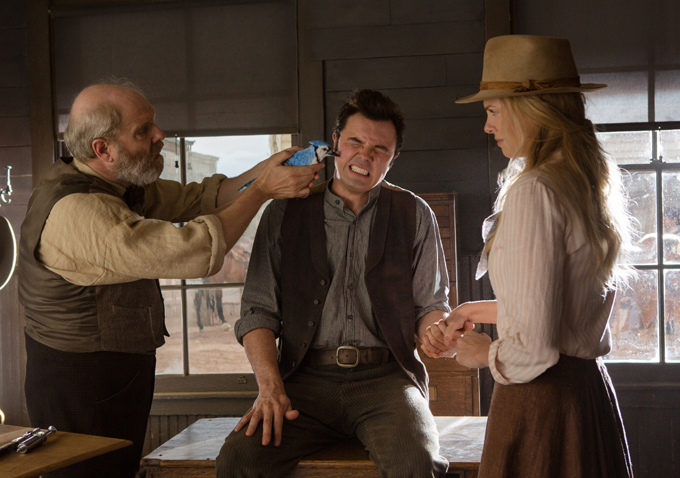 Bring to mind Seth McFarlane’s opening musical number as host of the Oscars and you’ll be fully prepared for A Million Ways to Die in the West.  “We Saw Your Boobs” is the epitome of McFarlane’s humor; dirty, juvenile, and unapologetic.  I don’t claim that there’s no intelligence behind his jokes, for much of what he’s poking fun at deserves ridicule, including our sensitivity towards bodily functions and political correctness.  But in order to find his style funny, you had better be prepared for the old dick&fart jokes of your prepubescence, humor that some (men especially) never grow out of.  Like Family Guy and Ted, McFarlane’s projects rely on your ability to forget being PC for a time and let yourself laugh at things you probably shouldn’t.  AMWTDITW just happens to be his best attempt at this concept, combining poop & history in a way that might make you a fan.

Talk about being born in the wrong era, Albert is the last man who belongs in the Wild West.  He’s a timid sheep-farmer who fears death, which is ironic, since any little thing could kill anyone in the small town of Old Stump at any time.  Snake bites, gun shots, wild animals, diseases, country doctors; there’s nothing safe about living on the frontier, a place where only the strong survive.  And so when Albert meets Anna, a woman who also seems quite out of place, things seem to be looking up.  But not so fast pal, because Anna is the wife of the most notorious gunfighter in the territory, the evil Clinch, a man who represents just another pathway to an early grave.  Can Albert learn to survive this brutal time period with all its killers, or will he become just another victim of the most deadly era in American history?

What didn’t surprise me about this film was the large amount of dirty jokes.  Albert’s friend Edward is dating a whore, someone who knows that a request for anal sex from a costumer means she can buy her boyfriend a new belt for church.  Yeah, that’s what you should expect from this comedy, that and explosive diarrhea.  That’s the style McFarlane brings to the screen, a combination of 11-year-old & college freshman, something that’s not really appropriate for any age at all.  But what saves the day and makes AMWTDITW a surprisingly enjoyable movie is both the cast and how they accept the absurdity of the film that they’re in.  Theron is the perfect heroine, Neeson the perfect villain, and both lend credibility to a movie that wouldn’t have survived with McFarlane as the sole lead.  And don’t forget the side characters, with cameos galore: Amanda Seyfried, Giovanni Ribisi, Neil Patrick Harris, Sarah Silverman, Wes Studi, Matt Clark, Alex Borstein, Christopher Lloyd, Gilbert Gottfried, Ewan McGregor, John Michael Higgins, Ryan Reynolds, Mae Whitman, Bill Maher, Jamie Foxx, Kaley Cuoco.  Add in a surprising amount of historical research about the period & a bit of genre mockery, and you have a movie that’s funny in a million ways.  Not wonderful, not innovative, often ridiculous, but undeniably humorous.