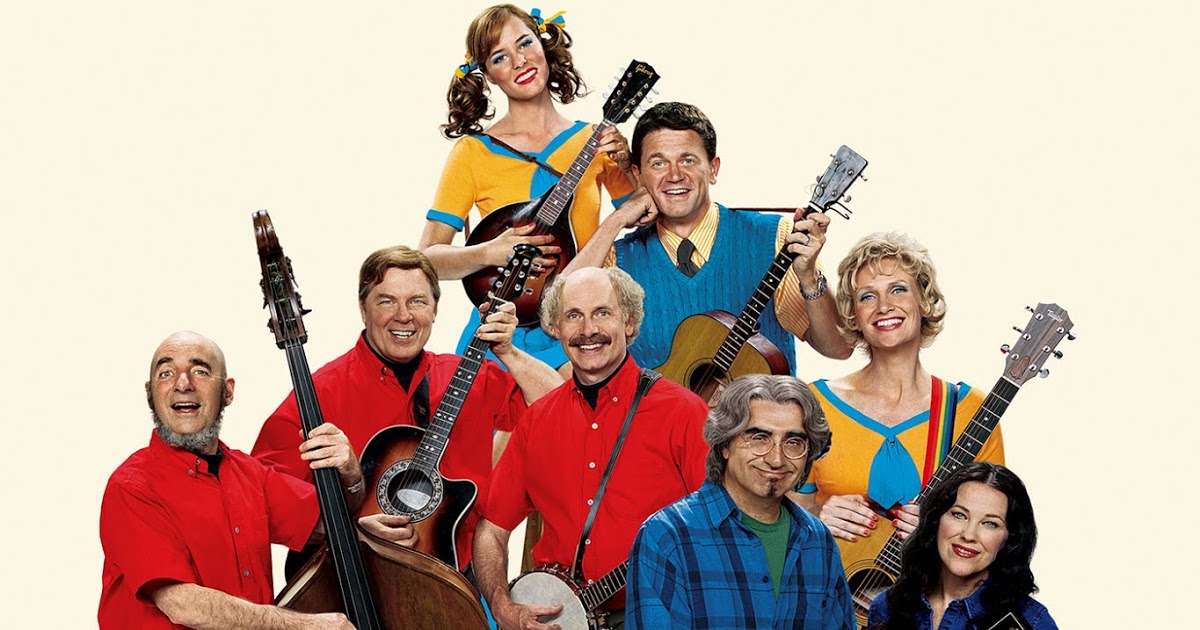 The gang’s all here for another Christopher Guest mockumentary, and it’s the last good one that he’ll make, so enjoy it while you can.  Actually, enjoy Waiting for Guffman, Best in Show, and A Mighty Wind a million times equally, they’re brilliant, and don’t worry about moving onward to For Your Consideration and Mascots, because they’re not.  Maybe it was a finite amount of magic, maybe the times just changed, but the style didn’t last forever, which at the same time doesn’t mean we can’t enjoy the ones we love forever, it just means new, strong, similar content might never come our way again.  It’s fine, just re-watch; these Guest classics are incredible, and none more emotionally wondrous than A Mighty Wind.

The Father of American Folk Music, Irving Steinbloom, has died, and the bands he once managed decades ago are gathering back together for one last show in his honor, in New York City, at City Hall.  The Main Street Singers are a large group who wear uniforms, sing complex harmonies, and smile until their faces explode; commercial, but committed.  The Folksmen are a trio of three now-old friends who stick to the roots of the genre, bringing classics to life on banjo and bass.  And Mitch & Mickey are just that, Mitch Coen and Mickey Crabbe, a couple of kids in love years ago, who have now moved on with their lives, though the fame of their innocent romance still follows them around.  Reunions aren’t always pretty, but it’s to honor Irving, and it might just do these musicians some good to play in from of adoring (if small) crowds once again.

If you’ve seen his other mockumentaries, you know what to expect from A Mighty Wind.  It’s offbeat, it’s off the cuff, it’s improv, it’s silly, it’s all over the place, but it’s so original that you’ll feel transported, and so hilarious that you’ll injure yourself laughing.  Guest & Levy write bizarre stories, but they let their actors completely and uniquely embrace the roles, so audiences get organic mixed with comedic, and the result is stellar.  Not later on, the magic sputters, as I mentioned, but it’s still good for one last go, and A Mighty Wind is that final experience.  Plus, there’s the added bonus of this being the most emotionally stirring of the first trio of films; it’s got heart that you don’t even see coming, and you might even shed a tear, which comes as a shock since the rest of the film is so bonkers.  Congrats to this cast for coming together and getting the job done one more time: Eugene Levy, Catherine O’Hara, Harry Shearer, Michael McKean, Christopher Guest, Bob Balaban, Jane Lynch, John Michael Higgins, Parker Posey, Christopher Moynihan, Don Lake, Deborah Theaker, Fred Willard, Ed Begley Jr, Michael Hitchcock, Larry Miller, Jennifer Coolidge.  And then there’s the music, at once poking fun of the past and impressing right now, with original songs that are meant to mock but somehow delight at the same time.  You can watch the movie, you can listen to the soundtrack, you can relive the 60s, you can feel like you were there; this film is something special, and it’s a goodbye to a recipe that worked more than once and always to our benefit, so thank you to everyone involved, you’ve given us a memory to last a lifetime.