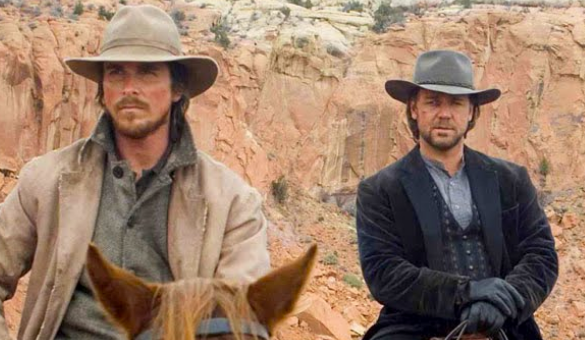 As far as modern Westerns go, 3:10 to Yuma is near the top of the list, and the fact that it’s a remake doesn’t bother me; at least it had a good base to build off of and launch up from.  The original story was written by Elmore Leonard, and the original film came out in 1957, so a 50 Year Anniversary edition was in order and should be respected, especially when it’s done this well.  A classic Western is a thing of beauty, and so is a modern one that holds the same charm, that honors the past by moving the genre into the future, which is what this film was able to do quite nicely.  The cast helped, they played their characters wonderfully, and 3:10 to Yuma saunters in as an instant hit, a Western gem that can be enjoyed any year.

Dan Evans is about to lose his Arizona farm to the railway company; he’s got a bunch of dry land, too many debts, a shot off leg, a family to feed, and no where else to turn.  But a stroke of bad luck might turn good, if he’s willing to put his life in danger.  Dan and his boys happen across the dreaded outlaw Ben Wade, having just robbed a coach.  Wade isn’t completely cold-blooded, and lets the Evans’ go, but is in turn captured when he overstays his welcome at the next town.  Dan then volunteers to take Ben to justice, escorting him onboard the 3:10 pm train to Yuma Prison, with a reward of $200 waiting.  But he’ll have to get him there first, with Wade’s gang thundering down to rescue their boss, and with a prisoner who is so much more than meets the eye.

Bale might be the greatest actor of our generation, with the exception of Daniel Day-Lewis perhaps, and he’s on his game again, playing an American in the Wild West, while of course hiding his accent, which gives him away as a Brit from the seaside South.  Why are all the best Hollywood actors English, you ask?  I have no idea, but it just makes that country even cooler.  Actually, Bale was born in Wales, and Crowe was born in New Zealand, so go figure, but it doesn’t matter; they’re here in a Western together and it’s terrific.  Yuma carries a classic feel because of its origins, but it also views as new, with a gritty, realistic take on the ancient good v. evil battle, and with enough skill throughout the production to make audiences fall deeply into the narrative.  And the cast is chock-full of stars: Bale, Crowe, Ben Foster, Logan Lerman, Dallas Roberts, Peter Fonda, Alan Tudyk, Vinessa Shaw, Gretchen Mol.  Foster & Lerman specifically are pretty special, two younger talents that would go on to be legitimate leading men, and they elevate this film a great deal.  A nice blend of action, heart, guns, and high noon drama, 3:10 to Yuma checks all the boxes and boasts all the names; you’d be missing out if you continued to let this movie go unwatched.