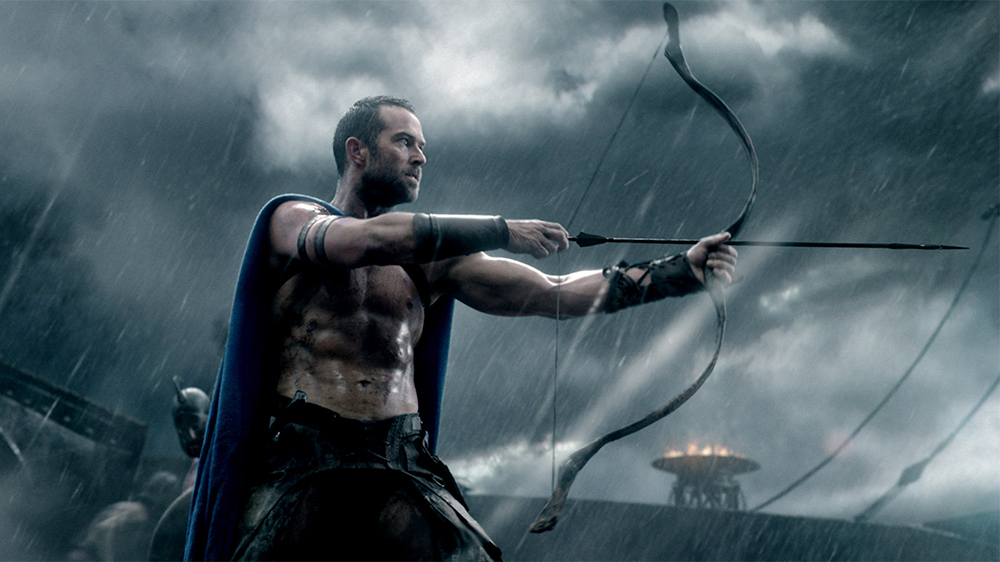 I don’t think I’m alone in saying that 300 was pretty cool.  Of course it wasn’t a superb piece of cinema, but it was immensely pleasurable to watch.  It turned Frank Miller’s graphic novel into a moving reality, taking his art and putting it right on screen for all of us to see & enjoy.  The historic background, the unique way Zach Snyder shot the film, all the men with six-packs; it was visually stunning and not something that will come along again.  But that didn’t stop them from trying.  Eight years later here comes 300 2.0, another attempt to capture audiences (and make a quick buck) with the use of Miller’s comic and Snyder’s screenplay.  This time they have amateur Noam Murro directing, plus the disadvantage of us having seen all this before, been there done that.  And that’s how Rise of an Empire came across, as if the movie had already been made and made better.

If you haven’t seen 300 get ready for some spoilers, because Leonidas is dead.  He and his brave 300 died at the Hot Gates in the last movie, betrayed by a hunchback, but not before killing thousands of evil Persians.  But we’re getting ahead of ourselves a bit, because the stories of the two films overlap.  Instead of fighting alongside Leonidas, we get to see the Athenian side of things as we battle with Themistocles in a parallel story.  Athens argues, Sparta holds back, but Themistocles knows that he & his navy must stop the evil Artemisia and her Persian horde while Xerxes deals with Leonidas.  If only he can unite all Greece, convince the city-states that they must fight as one, all while holding off the greatest fleet ever to take the sea.  But we know he can do it, just like his Spartans counterparts, using his superior intellect, manliness, and love of country.  So with the doom of Thermopylae looming, can Themistocles hold his front or will the Persian tide roll? If I had wanted to see 300 again I would have just rewatched it.  And in fact, I did, in preparation for this film.  The original is cool, beautiful, and excitingly fresh; everything the sequel is not.  Rise of an Empire felt more like a knockoff copy than a continuation of the story, a cheap attempt to make more money off of an idea that succeeded once before.  This Johnny-come-lately feeling presided over the entire film, making me feel like the plot & I were both being squeezed for all we were worth.  It was basically a re-do of the same plot lines, battle sequences, and climaxes, just from a different point of view.  It was like watching a ball game on the computer, choosing your own viewing angle, only you already know who’s going to win.

It wasn’t all bad I guess.  The first scene was like a painting come to life, that final shot from the original with Leonidas lying dead on the battlefield, and then entering into this artistic vision.  So that was nice.  And the acting wasn’t awful; Stapleton the stolid Greco, Eva Green hot & evil as always.  Even Lena Headey as the storyteller instead of David Wenham was OK.  And the fight scenes were neat in a chop-your-face-off kind of way.  But they were actually a bit too bloody.  In the first film the gore was like paint, like ink from the pages of the graphic novel.  In this one the violence was more gross, more pronounced, not-stop really, and it saturated the film unnecessarily.  I could have done with less war, more introspection, and a cooler look.  Basically, the first movie over again.  This one wasn’t that one and therein lies the problem because it tried to be and failed.