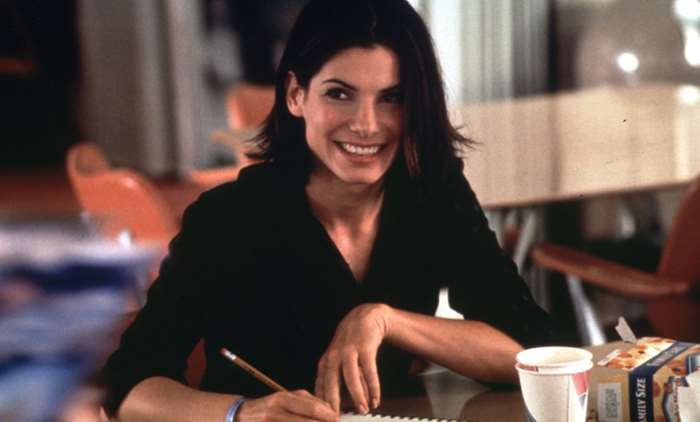 There’s a lot to like about 28 Days, mostly how very 2000 it is, but its setting is not its best attribute; the popularity of mental ward/rehab center dramas was a regrettable fad that should never have caught on, and this film indulges in that fantasy with far too much fervor.   We don’t need human torment to be popularized for entertainment purposes; de-stigmatizing yes, play-acting no.  28 Days does a few things well, a few passably, and some miserably, but if it ultimately works, that’s despite its cliched random-funny-messed-up-people routine, not because of it, and despite its star, who, although she puts on the performance of her career, was never good enough to be taken seriously.

Hi, this is Gwen, she’s an alcoholic, and she’s about to ruin her life.  She’s a writer, a drunk, an addict a terrible sister, and a complete train wreck, whose drunk driving incident will get her tossed in jail unless she agrees to four weeks in rehab.  So off she goes, though Gwen doesn’t think she has a problem, she thinks she can quick drinking and popping pills whenever she wants to, she simply doesn’t want to.  Oldest tale in the book there Gwennie, you’re not fooling anyone, especially not the other residents, who have all been there, done that.  She meets some great personalities, starts some surprising friendships, and just might learn a thing or too before all is said and done.

Sandra Bullock is a bad actress, always has been, always will be, there’s really no arguing that point.  We adored her in Speed, we thought she was fun in Miss Congeniality, but that’s literally it, and don’t even get me started on the white savior-ism of The Blindside.  She’s not that talented, she’s just oddly likeable, which works part of the way here, but not as far as it needs to.  She leads the film, sure, but not with any special quality, more like by default.  The setting is ridiculous and cluttered with cliches, the morals are pandering, and if we end up learning anything by the end it won’t have much to do with anyone involved in the film pushing us there, although the cast is pretty impressive just based on names: Sandra Bullock, Dominic West, Viggo Mortensen, Steve Buscemi, Alan Tudyk, Mike O’Malley.  But the film does have a very turn-of-the-century feel to it that’s obvious watching it back, with some tilted angle camera work, heavy messaging, kooky characters, and simple theme.  It’s not a bad movie, really, it’s just clinging to the 90s and relying on tropes, masquerading as something better when it wasn’t even terrible at its core; it was simply in dire need of a shot of inspiration, not a plucky blast of Bullock.