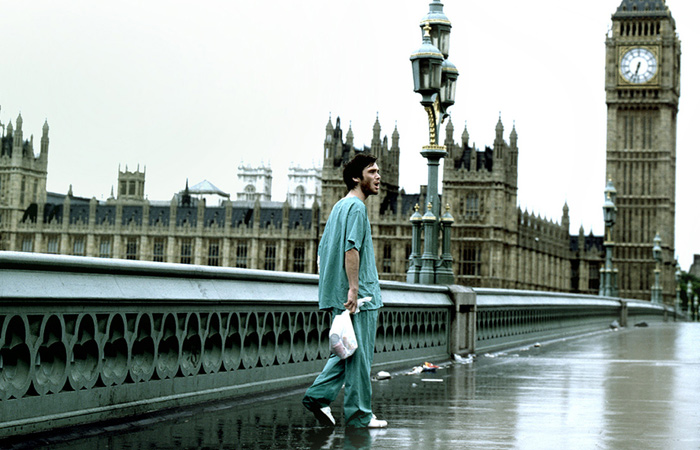 28 Days Later is one of the best zombie movies ever made because it’s barely about zombies.  A slight back story, a tiny Rules To Live By segment, some info on how you get infected, and then bang, the race begins, with the struggle to survive having very little to do with the creatures themselves,  but rather how humanity would respond to such a disaster.  In that way, it’s a commentary on society, and I know that’s neither a breakthrough nor is this the first horror film to examine that, but very few have succeeded this well by doing it so simply.

Four weeks after a rage virus spread throughout the UK, London is a ghost town, and the rest of the country isn’t doing much better.  Humans have turned into monsters, or else they fled or died, and the societal structure we spent so long building up has come crumbling down so very quickly.  Jim wakes up in a hospital after an accident left him unconscious, only to find that he’s all alone in an alien world where things want to eat him. Luckily, he runs into Selena, who knows the ropes, and then into Frank & Hannah, a father/daughter pair, and together the foursome goes in search of some kind of hope, or at least the means to live another day.

This wasn’t Danny Boyle’s big break, but it sure did prove what he could do; it’s like when Stephen King takes on something dumb or clichéd, like vampires or aliens or zombies or serial killers, and simply does it better than other people can, like, “there you go, you see?”  That’s 28 Days Later, a monster movie that’s not reinventing the wheel but rather making the roundest, smoothest wheel you’ve ever used, like it was easy to make something so perfect so quickly when everyone else has struggled every other time until then.  What works so well is how little audiences are talked down to, how little information we’re told, how much the human connections matter in the face of such catastrophe, not the catastrophe itself.  And there are still zombies, deaths, guns, chases, scares, don’t get me wrong, it’s just that those things become for fun, for entertainment, not to trick us into watching something otherwise awful.  And what a cast, with Murphy, Harris, and Gleeson delivering excellent performances against a really difficult backdrop.  You could make the case that this film is the best zombie movie ever made, although I wouldn’t keep those expectations as high for the sequel, 28 Weeks Later, which features an incredible cast but not as crisp a story.  No, this one’s special.