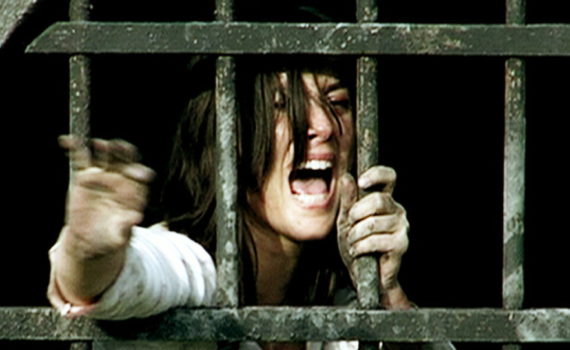 I can’t remember when or how, but this movie was recommended to me, and now I’m forced to wonder why.  Basedt in Romania but featuring French as well, it’s a small-time horror flick that won’t appeal to American audiences.  I’m not sure how it appeals to foreign audiences either, but somebody must like it, because it isn’t derided, it’s fairly well-liked.  And I hate to be the voice that says “I don’t get it”, but I don’t get it.  Them is a very simple flashlight thriller without anything else to back the story or the talent to take anything to the next level.  If you’re looking for under-the-radar, look elsewhere, for while your intentions might be good, this movie isn’t.

Clementine is a school teacher who travels outside the city to reach her home and the love of her life, Lucas, a writer who waits for her there.  They are a beautiful couple, full of romance and comfort, but their idyllic existence is about to be shattered.  In the middle of the night, Clementine hears a noise outside, which reveals itself to be someone stealing her car.  After a call to the police, things go from bad to worse; the phones cut out, the power goes off, and strange scurryings are heard around the house.  Soon, some unknown terror is inside, and it’s up to our heroic couple to find out what it is and how to survive the night.

Sounds pretty basic from the description, but it’s actually far worse.  The standard recipe is there at the beginning, but the movie follows none of the Hollywood horror norms.  Now, that might sound like a good thing, and sometimes it definitely is, but not here.  Instead of taking the plot in a new direction, the story goes nowhere at all, and our two main characters spend the majority of the film wondering what that sound or that light was, while stumbling around in a dark house.  Not my idea of fun, and even though the action resolves itself in the end, by then I couldn’t possibly have cared less.  There’s nothing worth watching about this movie, and the fact that it’s only 70 minutes is its only saving grace.