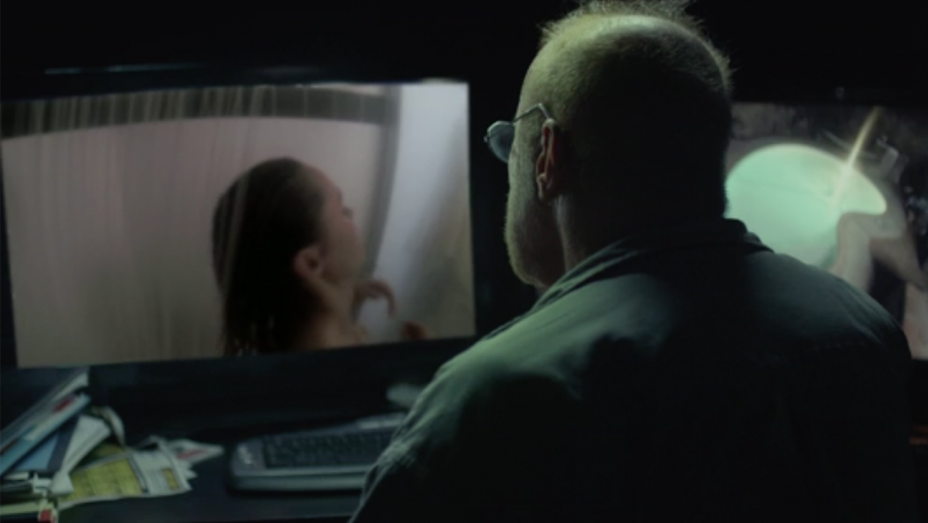 Oh my god, there’s a 14 Cameras, which I think it one more camera than I can take.  13 Cameras was my limit, and I barely made it out alive, or without destroying the video so that I never had to watch again and no one else would be subjected to it either.  It’s not that this random, gross, creepy horror flick is so terrible, it does nothing wrong that a million haven’t done before it, but it does feature one or two specific oddities that make it almost unwatchable, and that’s why I can’t recommend that you give it a chance.  There are better and/or potentially better slasher flicks and gory movies out there that are worth your time; 13 Cameras simply isn’t one of them, because it does a few things very wrong and not nearly enough right.

Claire and Ryan have just moved to the west coast from the east, following Ryan’s career, and are preparing for the arrival of their first child.  Their new landlord is a bit weird and smells funny, but the house is nice, it has a pool, they’re just feeling a little off because of the relocation, it’ll all get better in time.  But their marriage is a little on the rocks because of the new baby; Claire is nesting and hates her body, Ryan is tired of the decorating and misses having sex.  And on top of that, unbeknownst to the couple, the owner of the building is watching them through secret fiber optic cameras he has strategically placed throughout the home; in the pool, in the bedroom, in the bathroom, in the shower.  Everything Claire and Ryan do and say is viewed by creepy Gerald, their darkest secrets revealed to a man they don’t know sees all.

It’s not a terrible premise, a horror movie based on invasion of privacy and some masturbating whacko who carries around the odor of rotten mayonnaise, which I thought was a humorous and physical way that the writers picked to explain things.  But that’s about where the good stuff leaves off, except for a bit of voyeuristic nudity and a few uncomfortable/suspenseful moments.  The reason the positives didn’t continue is because PJ McCabe can’t act, not even a little, and he basically ruined the show.  Not that anyone else was doing a bang up job, Brianne Moncrief wasn’t much better, nor were the stupid side characters, but at least they were trying with moderate success; I don’t think PJ knew what actors were supposed to do.  He was horrendous, the plot was dumb other than the watching, there was this giant, annoying, detestable story line on the fringe, nothing went according to plan, and the whole project came crashing down; why someone made a sequel might stay as one of the world’s great mysteries until the end of time.