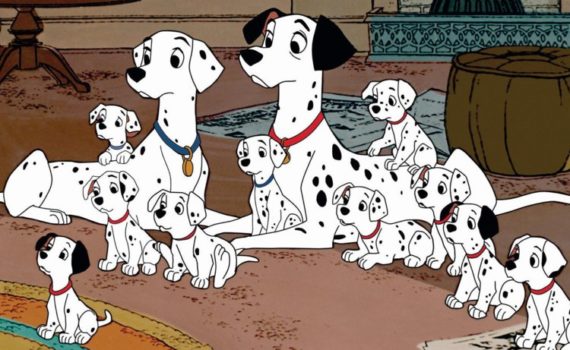 Disney has always known what they were doing; back in the 30s & 40s when they were just starting out but already making magic, even during WWII when production wasn’t the same but they gave us some music instead, and then in the 50s & 60s when the classics really started pumping out.  101 Dalmatians is among the best that the animation studio ever created, a highlight of family fun and animal action that still holds up all these years later.  I recently rewatched it with my kids and it’s still so lovely; the music, the dogs, the love, the drawings, all wrapped up in a pleasant package, hand delivered to audiences 60 years ago but still resonating today.

Pongo is a Dalmatian dog living with his “pet” Roger in London, and they’re happy, but their love life isn’t exactly hoppin’.  So Pongo takes matters into his own hands, walks Roger to the park, and has him literally run into a lovely local lady named Anita, who just happens to have a female Dalmatian of her own, a pretty lass called Perdita.  Roger & Anita fall in love, so do Pongo & Perdita, and soon a litter of 15 puppies arrive, blessing the household with their rambunctious joy.  But danger lurks on the horizon; a woman named Cruella De Vil wants the entire littler once they’ve grown their spots, in order or make them all into a dog-skin coat, and she’ll stop at nothing to get what she desires.

What a wonderful, magical, pleasantly-animated film, a Disney classic if ever there was one.  I’m so glad my family can appreciate these older, more muted, hand-drawn movies, because they have a real gift to give us, and they were made with such painstaking work, it’s so great to watch them over & over again, reliving how much effort and time was put into giving us something so great.  101 Dalmatians has a little music, a historic villain, the cutest dogs ever, and an entire cast of intelligently-made characters that will all delight.  Because it isn’t a Disney Princess flick or a regular musical I think we can sometimes forget about this little gem, but we should definitely be giving it the love it’s surely due.