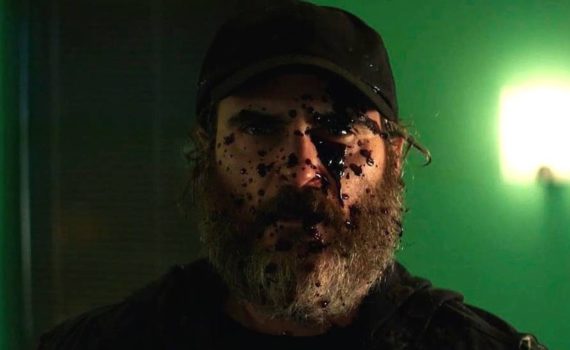 The first time I saw Drive I didn’t like it; too violent, too sensational, too moody, too muted.  As time went by, I couldn’t shake the feeling that I had missed something, that I had let something slide by without looking too closely, that if I had but paid more attention, I would have seen something special.  So I re-watched, and now I think it’s an incredible film, I doubled my rating, from 4/10 to 8/10, so opinions can change, perceptions can alter, second viewings really can make a difference.  I mention that because I have the exact same feeling about You Were Never Really Here.  I liked it just fine the first time, but I have a suspicion that if I watched it again I’d be rewarded with falling in love.  If that’s the filmmaker’s fault or my own is up for debate, but I suppose I can only judge the movie on what I’ve already seen and witnessed and felt, not on what I think I’ll experience the next time I pop in the disc. Joe is a walking skeleton in the closet, an embodiment of horrific secrets that are best faced but stay behind the doors, only because confronting them is absolutely too frightening.  He was the child of an abusive relationship, he witnessed terrible things done at the hands of his father, he saw war firsthand, he watched innocence destroyed, and he knows what evil humans are capable of, especially towards those incapable of protecting themselves from the darkness.  Because of all this, Joe has become a creature of the underworld, a hired gun whose job is to find missing kids and to make those who took them pay.  He’s good at what he does, too good, often leaving his humanity behind when he lifts a hammer in his hand, but that only makes him more powerful, more in control, the past lack of which has left him scarred in a place that can’t be seen.

Joe’s latest mission is to find the young daughter of a local politician, a girl who has been unstable since her mother’s death, and who might be in serious trouble somewhere in the belly of the city.  With whatever means necessary, Joe must find her, rescue her, and punish those responsible, bringing her safely home to her father while not raising any compromising alarm.  But this job is more complicated than is usual, has more secrets behind it than is safe, and won’t go as smoothly as Joe hopes.  He’s in way over his head, and the people he must kill won’t go down without a fight.  But they don’t know Joe, don’t know what he’s been through, don’t know how brutal he can be, can’t fathom the depths into which he dives before he faces his enemies and relieves them of their souls. The more I write about and think about this film, the more I am convinced that I need to give it another chance to impress me, because while I think it’s solid, it never took me beyond that, and I think it might the second time around.  I just have this feeling that there’s more to be discovered, that I need to look more closely, and so I will remind myself of that as I critique the feature, a good one that I think has the potential to be great.  The story is classically simple; a troubled man in a grim town, getting by as best he can, doing the dirty work because it needs done, staying in the shadows because that’s where he feels the most comfortable.  And Phoenix plays that part perfectly, I never doubted that he could or would, he’s a consummate professional, and his skills are on display here.

But let me touch on what I didn’t love the first time around, even if I think some of my opinions might change when I sit down with the film again.  First, Ramsay has been around the block before, although this Scottish director has only released a few feature films.  Morvern Callar was weird, We Need to Talk About Kevin was weird with a point, and You Were Never Really Here is no different, a very strange and deliberate look at violence and trauma, a movie that won’t be for everyone.  It’s a very specific mix between Oldboy (the original is so much better than the remake) and Good Time, both of which are superior films.  Ramsay borrows heavily, which is fine, but without enough of her own ideas to really make a shocking impression.  Even the music seems recycled, fine but not new, and that feeling prevails over the whole picture.  Perhaps when I watch again I’ll stick to my first impression, that the film is imperfect due to its resemblance to many others, but I hope that I’m wrong; I hope the next time I’m blown away. Video – With an aspect ratio of 2.39:1 (16×9 Widescreen 1080p HD) and shot using an Arri Alexa XT camera with Panavision Primo Anamorphic, C-Series, G30, MAP55, MAP200, ATZ, and AWZ2.3 lenses, the video quality of You Were Never Really Here is definitely a highlight of the film, a real key to the mood aimed at by the director.  The cinematography is exceptional, with a gifted use of color and of atmosphere that’s a credit to the movie.

Audio – The Blu-ray disc was done in English 5.1 DTS-HD Master Audio, with subtitles available in English SDH and in Spanish.  The sound is a driving force of the action and of the ambiance, it was obvious a ton of work was put in to making the audio mean something.  The score itself was a bit done, I’ve heard others that are very similar, it didn’t seem fresh, but it also was never poor or poorly orchestrated.

Extras – The only bonus features on the disc are a few trailers and some bookmarks for the Blu-ray. Recommended.  While I imagine that another viewing could be quite impacting, I have to go with my first experience, and I also think that some of the film’s flaws will never go away.  I simply want to watch it again so that I can see if the mood and the metaphors will float to the surface a bit more and if the problems will start to sink.  I think there’s a good chance that happens, and I really hope it does, because this is a film I could love given the right moment and understanding.  As is stands now, the details seem a bit recycled and the direction isn’t immaculate, leading to my middling rating.  Joaquin Phoenix isn’t middle of the road though, he’s a standout wherever he appears, and this film is no exception.  The girl was a bit underdeveloped, or perhaps underutilized, the violence could have been capitalized on a touch more, and the whole thing needed an element to set it apart from others of the genre; Joe’s trauma storyline just wasn’t enough.  The video is excellent, the audio strong, but there aren’t many extras, so the technical side is mostly positive but not perfect.  The same could be said for the movie itself, but I hope that shifts after a re-watch; the potential is there for something extraordinary, I just don’t know if it can be tapped.