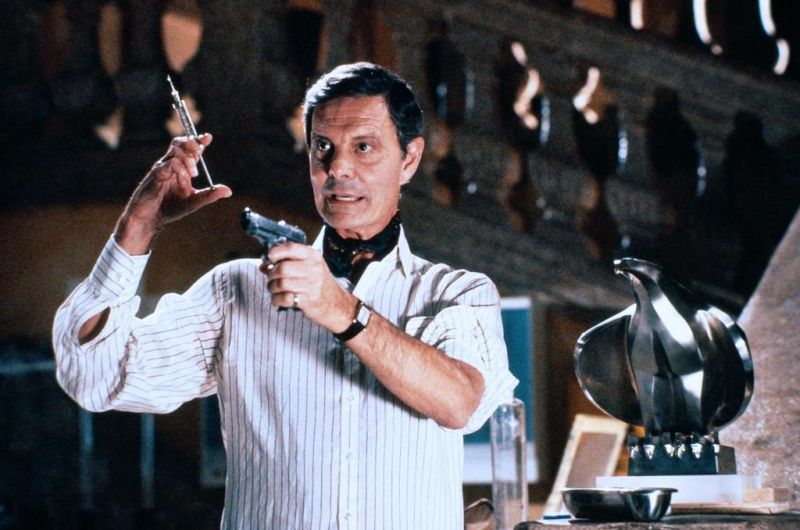 There was absolutely no accounting for taste in the late 80s & early 90s.  From men with mustaches to women with short hair, the beauty trends that went along with the turning of that decade are inexplicable.  And of course, as they always do, the movies of that era echoed the culture, producing an ascetic that’s hard to explain, but impossible to deny; just watch an episode of Magnum, P.I. and you’ll know what I mean.  But not only did those trends live long & prosper, they were copied & carried over to other time periods, persisting against all logical sense.  Looking back now, 80s/90s movies have become a genre of their very own, often filmed a certain way, often acted out a certain way.  Not to lump everything from that era together, but Year of the Comet serves as a great example of what was popular then, what refused to die, and what we kinda still like to this very day. In the wine business, no one knows more than Margaret Harwood and her family, dealers in upper-echelon potables for generations & generations.  Margaret longs to stop hosting tasting events and start cataloging cellars like her father & her brother, though dear old dad doesn’t think she’s quite ready yet.  But finally, after a sudden death and an abandoned collection in Scotland, Margaret gets her first crack at independent wine analysis.  As luck would have it, Margaret stumbles across the discovery of the century; a rare giant bottle of Napoleon’s own private vintage, laid away during the fabled year of the comet, hidden from all eyes for more than one hundred years.  But she’s not the only one who wants that vino.

Oliver Plexico, a representative of a very wealthy wine-collector, has come to pick up the bottle for his boss, after an agreed-upon one million dollar asking price.  Great job Margaret, you just made your family a million bucks, if you & Oliver can deliver the bottle in one piece.  Problem is, you’re not the only pair who want that treasure.  For a group of mad scientists using the Scottish home for a laboratory, the wine may hold the key to the missing part of their formula.  For a local mom & son who run the B&B, it would spell financial freedom.  And for a group of Greek thugs, it’s what their jefe wants, so it’s what their jefe gets.  Who will end up with the prize in the end, and who will die along the way? Year of the Comet is a strange mix of Bird on a Wire and The Princess Bride, an action/comedy that feels more like a fairy tale than a thriller, a movie that plays for laughs just as much as it pumps up the adrenaline.  It’s beyond silly; secret formulas, giant cottage criminals, rowboat chases, helicopter chases, airplane chases, motorcycle chases.  Come to think of it, there are far too many chase scenes in this film, and that’s not even including climbing walls, running through hills, fistfights; a ton of action, but again, all sent way over the top in a way that screams farce.  It’s this era, so much of it was indeed farcical in nature, from the unbelievable love stories to the ridiculous villains, it was all blown up for out enjoyment in a way that’s only moderately still enjoyable.

You’d have to really want to buy in if you’re to have a legitimate shot at loving this goofy film, because time after time the individual pieces will show you obvious reasons why you really shouldn’t.  Mainly I’m referring to the acting, which was abysmal.  I don’t know what directors were thinking with Penelope Ann Miller in the 90s, but they cast her in anything from Kindergarten Cop to The Relic like she was a top choice, failing perhaps to notice that she was actually awful.  Tim Daly wasn’t much better, this Tom Selleck wannabe making a name for himself with Wings but not strong enough to put a stamp on much else.  But, with all genre/time-bashing aside, Year of the Comet is also indicative of the way we kinda like this type of movie anyway, despite the fact that it’s not all that great.  Not all that great, pretty bad acting, a touch too silly, but strangely delightful anyway. Video – With an aspect ratio of 2.35:1 (16×9 Widescreen), the video quality of this film is straight ’92, failing on nearly every level except its delivery of that nostalgic picture quality that we all remember from our old VHS tapes.  There are quite a few fun scenes that make up for the lack of quality, shots all around the world & in every form of action.  So, fun to view, as long as you appreciate the time period.

Audio – There are no audio options or specifications available for this disc.

Extras – There are no special features available on this disc. Rent It.  For what amounts to a fun blast-from-the-past film and not much else, Year of the Comet earns some forgiveness, though not a complete blind eye to its problems.  It’s enjoyable, goofy, very Romancing the Stone, but not quite wonderful when held up under a microscope, which is exactly why it should probably be left in the past, a far distance from critical eyes.  The video is understandably poor, the audio the same, and neither the sound or the extras are well-represented on this disc.  Watch for a throwback if you liked this movie a quarter century ago, watch if you still have a thing for smooth talkers with mustaches, but be careful with your hopes & standards, cause they could be in for an unpleasant surprise.