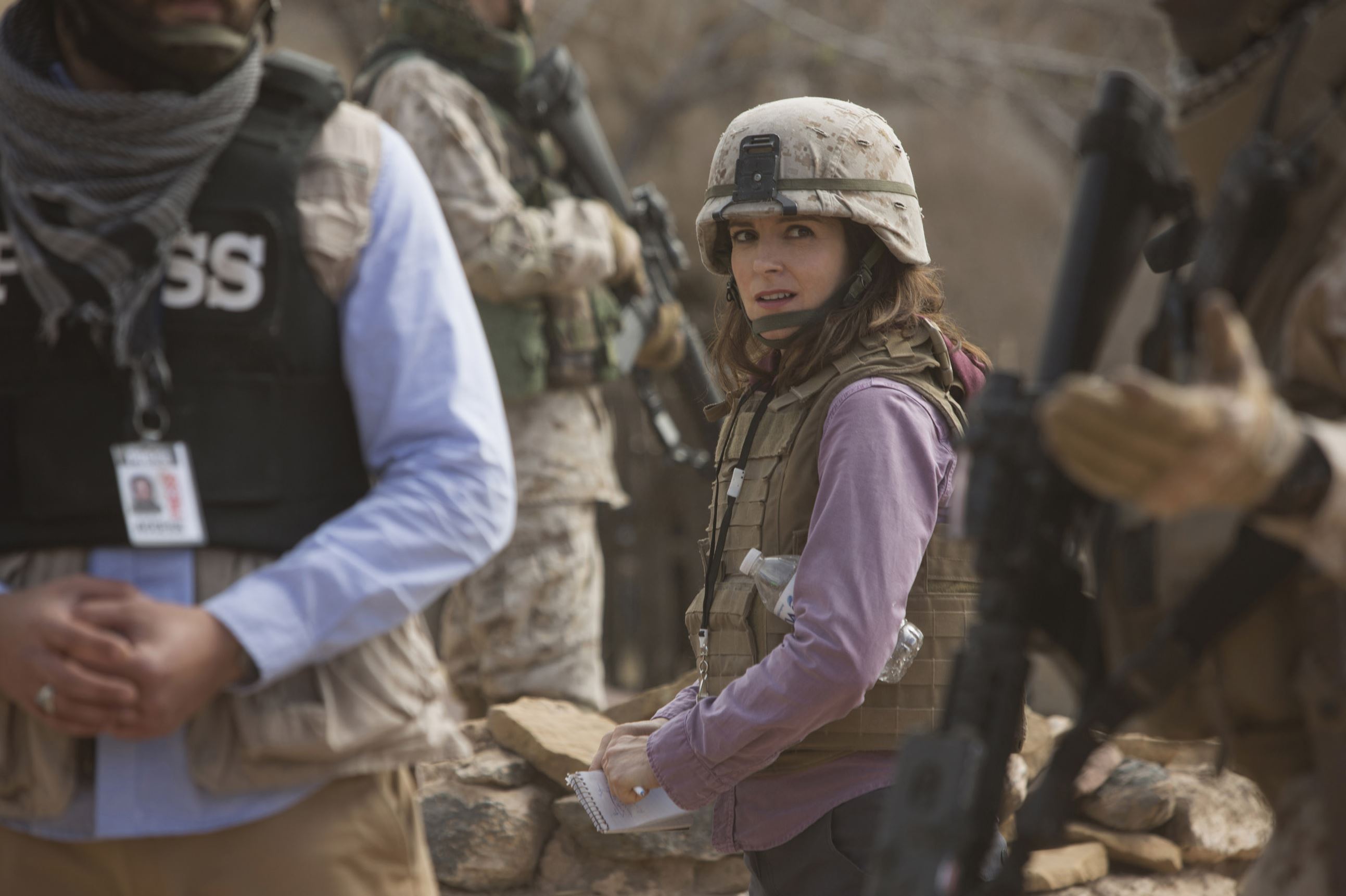 Tina Fey is best known for Saturday Night Live, where she was a mainstay with Weekend Update from 2000 to 2006, returned in 2008 as the now-infamous Sarah Palin, and was also the show’s head writer for seven years.  She became known as a force of biting intelligence in the world of comedy, as much behind the camera as on the screen, sculpting humor in a satirical & witty way that could not be denied.  She would go on to launch both 30 Rock and Unbreakable Kimmy Schmidt, also writing for & hosting the Golden Globes multiple times with her friend Amy Poehler.  Fey has dabbled in most everything concerning the entertainment industry, and that includes acting.  Mean Girls, Man of the Year, Baby Mama, The Invention of Lying, Date Night, Admission, Muppets Most Wanted, This Is Where I Leave You, Sisters; comedies all, and not always great, but finally with Whiskey Tango Foxtrot she’s hit the nail squarely on the head. Kim Baker leads a life of boring & predictable existence.  She writes pointless articles that nobody reads, she dates a man who she has absolutely no passion for, she follows the same exercise regimen every single day, and she feels as if she’s both literally & figuratively going nowhere.  But a chance to change all that arises and Kim, shockingly, might just take it.  Her news agency is looking for reporters to travel to & cover Afghanistan, where a now-forgotten war is slowly being fought among the mountains.  All public & military eyes have swung to Iraq, but Afghanistan still holds stories, still has secrets to share, and still needs the news.  So off Kim goes on the adventure of a lifetime, a choice even she doesn’t understand why she’s making.

In Kabul, or the city playfully called the Kabubble in reference to its extreme isolation from the rest of the world, Kim learns more about herself in three months than she has in the last thirty years.  She’s thrown directly into the fire, not understanding protocol, not understanding security threats, not understanding that she’s now a 4-10-4, a woman who was only average in the States but who’s now a goddess in the desert.  Kim learns to be the reporter she’s always dreamed of (imbedded with the troops on dangerous missions), she allows herself the freedom of sex & love (in a place where there’s no one to judge her), and she becomes increasingly happy in a world in which she never imagined she’d find joy.  As the years tick by, Kim finds life in Afghanistan to be much more than she ever expected, desirable in the strangest ways, and perhaps too captivating, as violent events there begin to seem more normal with each passing day. This is a true story, based on the memoirs of Kim Barker, called The Taliban Shuffle, detailing the journalist’s days in the field in both Pakistan & Afghanistan.  That real life element adds an immeasurable amount of credibility to the film, reminding us that, while it’s a Hollywood version complete with Hollywood side stories, many of the events depicted here did happen, or at least do happen, painting a very vivid picture of a place that most of us can’t even imagine clearly.  We’ve seen Middle East war films, we’ve seen journalism dramas, but we don’t often see stories like this presented in this way, with a hefty dose of comedy & with a female lead.  Whiskey Tango Foxtrot gives us a new perspective on a time period that’s already fading from our memories and on the people who were there on the ground in a uniquely awkward fashion.

Give credit to Tina Fey for making the movie, with a role that’s definitely her greatest to date.  Not only did she capture the character and make us laugh in so doing, but she brought a sense of serious voyeurism to the film, transporting us (very realistically) behind the scenes of the war, into the lives of the people who fed off of it and used it to enhance their careers.  Climbing the ladder was mixed with helping to deliver justice in a strange mix of American capitalism and Eastern orthodoxy, creating an overall story that was both fascinating & true.  Fey was the perfect lead, with Martin Freeman by her side as the equally-perfect & ultra-lovable romantic interest.  Margot Robbie was fine in a role that could have been cast with anyone remotely attractive, though she blows everyone else out of the water in that department.  As a unit, the cast was solid, and all supported the plot toward its satisfying conclusion, the film following the leader right along, producing a movie that was at once entertaining, informative, heartfelt, and fun. Video – With an aspect ratio of 1.85:1 (1080p HD), the video of the Blu-ray disc is excellent, though perhaps not quiet as amazing as you might expect from the media and given the “action” background of the film.  Whiskey Tango Foxtrot is in essence a comedy, though based on a true story, so any visual expectations should be tempered.  Still, the picture quality is solid and makes for a great viewing experience.

Extras – There are many special features available on the Blu-ray disc.  All In: The Making of Whiskey Tango Foxtrot – 14 minutes – a behind the scenes segment.  War Reporter: The Real Kim – 5 minutes – we meet Kim Barker.  Embedded in Reality – 6 minutes – filming & using imbeds.  Wedding Party – 5 minutes – capturing the culture of the area.  Laughing Matters – 4 minutes – a look at the inherent comedy.  Deleted Scenes: Kim and Iain, Daymare, Prison, Kabul Zoo.  Extended Scene: The Wedding. Highly Recommended.  Tina Fey shines in what is basically her first attempt at drama, though layered in comedy as to make a smooth transition.  She captures the real life character very well, transporting us along with her into a world that’s difficult to imagine, hard to accept while there, and then almost impossible to forget.  It’s a fascinating true story, one that translates well to the screen, and one that Fey manages to carry on her shoulders.  Martin Freeman is the ultimate sidekick here, adds a depth to the story that could have gone missing, and allows us to love Kim Baker all the more.  The video of the Blu-ray is great, as is the audio, and there are a ton of extras on the disc if you’re looking for more.  An accessible comedy but also a relevant drama, this film will be many things to many people, making it that much easier to recommend.