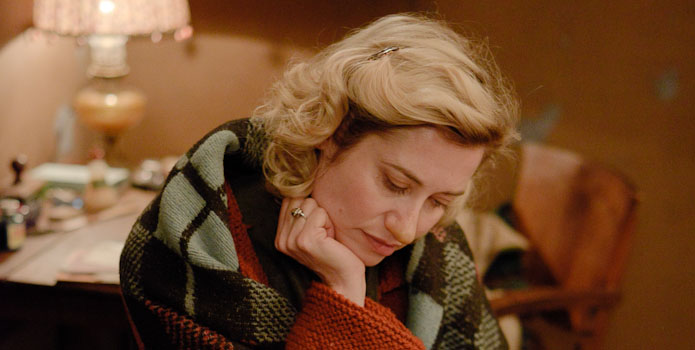 A brilliant man once said, “There are two types of people in this world: those who like Neil Diamond and those who don’t.”  Well put, Bob, and the same could go for French writer/philosophers; you either dig ’em or ya don’t.  Sartre, Proust, Genet, de Beauvoir, Leduc; a laundry list of great minds, no doubt, but a genre of theatre/novel/philosophy/expression that takes a certain type of person to love, at least looking at it from a modern perspective.  And so the same goes for films about those genius individuals; there are people who love historic French cinema about early 20th century playwrights & authors and those who don’t.  Count me in the latter category.  In fact, count most people in the latter category, as the majority of Americans aren’t running to the theatres to see the latest biopic of a popular woman who wrote racy novels in the 1940s & 50s.  I hate to dumb down to the populace, or add myself to such a group, but I just can’t get excited about this category of film, be it fictional or biographical, and so was left extremely, and simply, bored by Violette. This is the true story of the middle years of famous French author Violette Leduc, a biography showing her rise to fame but also the internal & external struggles that accompany such a troubled visionary.  Violette is a bastard, an unloved & unclaimed child whose father never acknowledged her and whose mother never wanted her.  A burden to an unloving woman, Violette found it difficult to love herself and, subsequently, spent the majority of her life seeking love & acceptance in the strangest of places.  During WWII, Violette was a trader on the black market of food, a smuggler & seller of luxurious goods like eggs and jellied meat.  Her crimes kept her alive and in touch with the rich & exiled.  A woman married, pregnant, aborted, and abandoned, the only hope she had as the war ended was that she might someday write, a talent newly developed, a passion newly found.

This passion became her occupation when Violette moved back to Paris from the countryside and met her mentor Simone.  This well-known author helped Violette enter the world of literature, connecting her to the right people and supporting her career.  But to Violette, this relationship was something more, a love she had been looking for, a desperate attempt to be cared for by someone wiser & more balanced.  Violette craved love the way the average person craves food, needing fulfilled just to survive, turning to both men & women for any type of affection.  Her pathetic & juvenile attempts to be desirable often left her more empty than she was to begin with, leading to loss of work & a stint in a clinic.  But the ideas & the emotions kept pouring out, and Violette kept producing novel after novel, each more personal, raw, and scandalous than the next.  Her career had begun, though happiness was not so easily captured. From the description, you might think there would be some sensuality to this film, some of the same edge that made Leduc’s novels so popular, pushing the envelope of decency in a way that was liberating to women and fascinating to men.  She was a groundbreaking author, a woman unafraid, and that power could translate well to the screen.  Unfortunately, it didn’t here.  There was an emphasis put on the story that Violette was no beauty, that she found herself to be ugly & that feeling tainted her search for happiness.  You can judge for yourself whether Emmanuelle Devos is attractive or not, but regardless, the film deleted any sexuality from the film, leaving only the bare bones of the act, making a movie about a woman who frankly discussed her unusual sex life as passionless as they could.  No need for gratuitous nudity, I didn’t want Hollywood sex scenes, but any heat that might have been produced by the story was specifically removed.  Perhaps Provost did this intentionally in order to eliminate sexism, to show Leduc as a troubled author, as no less than a man, to create a film that focused on art rather than eroticism.  That’s all well & good, but other elements needed to be added in to replace the excitement.

Unfortunately, nothing was, leaving me more bored than anything else.  It’s not because it was subtitled, not because it was long, not because it was French, not because it was set in 1940, although I’m sure none of those facts helped.  The reason I was bored was because nothing happened.  The film was broken into parts, the parts corresponding with turning points in Violette’s life.  At each new section I expected the story to take off, to become interesting, to hook me into following a fascinating life.  The problem was, Leduc’s life really wasn’t that interesting.  She had some issues, turned them into books, and became famous.  Unfortunately, that sentence might be a spoiler, because the film was not about much else.  I’m not trying to belittle the effort that Provost & Devos put into the project; there is depth of emotion if you care to feel it, subtext if you care to dig for it.  But the surface was so off-putting that I never wanted to know more.  I disliked the character of Violette, finding her childish and annoying rather than passionate.  None of the other characters sang out, and even the War was barely mentioned.  This was a surprisingly lifeless film, especially for a movie meant to breathe life into a name that most of us had never heard of before.  It failed to capture my attention and I wouldn’t recommend that you waste yours. Video – With an aspect ratio of 16:9, the video of the film is nothing to get excited about.  These stills represent the best visuals you’ll get, images that were hurriedly swept past during the movie.  With the story not being the captivating plot I wanted, a great eye for a great shot would have been appreciated, but I felt even that lacking, as no time was given to the beauty of any moment.  The picture quality itself was fine but not memorable, clear but not wonderful.

Audio – The DVD was done in Dolby Digital Stereo; it is a French language film with English subtitles.  There are no audio options or choices on the DVD.  The sound quality was fine, with a use of a single musical theme that was confusing.  It was used repeatedly and often in a moment that could have been climatic.  However, after feeling on edge the first few times, I soon realized that nothing exciting was about to happen, ultimately holding that fact against the musical theme. Skip It.  It would take a very specific person to love Violette.  Funny, since the same could be said about the character, a character who was ultimately unloved, disliked as I disliked this film.  Are you a fan of French literature & philosophy?  Do you like French film?  Are you a feminist?  Answer ‘yes’ to all those questions and you may have a shot at enjoying this film.  Otherwise, there are other movies for you.  The video quality was just alright, the audio quality the same, and no extras were offered on the disc.  Overall, a disappointing film, one that took effort to watch and gave nothing in return.