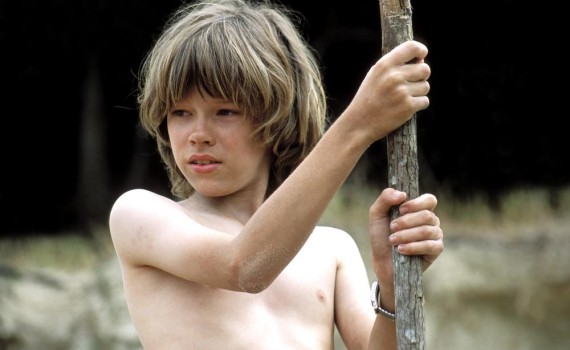 David Gordon Green seems like an odd duck, and I mean that in the nicest way possible.  His films are unique to say the least, and he seems to produce them in pairs.  Pineapple Express and Your Highness, goofy pot comedies with the likes of James Franco & Danny McBride.  Later, Prince Avalanche and Joe, offbeat looks at alternate lifestyles that mess with your head.  And, more recently, Mangelhorn and Our Brand Is Crisis, more mature films starring solid celebrities.  Then there’s his early work, All the Real Girls and Undertow, indie dramas that showed a good bit of possible talent.  Undertow has a little Joe in it, but being an early project, isn’t one of Green’s best.  In fact, it’s perhaps one of his very strangest. On a rural pig farm in backwoods Georgia, the Munn family make due the best they can.  John, the father, who lost his wife, works as a taxidermist in town, generally neglecting his two boys back at home.  Tim is sickly, with a stomach ulcer that keeps him from keeping down his food and compels him to eat strange substances.  Chris, the elder, is strong & able, but feels trapped on the pig farm, working hard every day with no end in sight.  He often gets into trouble, commonly on account of his young girlfriend Lila.  The cops pick Chris up, John gets mad, the pigs get fed, Tim vomits; it’s all pretty much decided at the Munn ranch, and life doesn’t seem to hold many surprises.

That is, until the day that Deel enters their life.  He’s John’s long lost brother, having been in jail for some time after a quarrel the two had many years ago.  There are secrets buried here that the boys know nothing about, secrets that include their mother, their grandfather, and stolen treasure that might just be about to resurface.  Deel’s intentions are guaranteed not to be honorable, but his sway over Chris is unmatched, leading toward a showdown that will decide the fate of the entire family.  Pig slop, broken down cars, junkyards, possoms in cages, priceless gold coins; it’s safe to say that life for the Munn family is about to get a whole lot more interesting. The worst part of this film is its melodramatic feel.  At first, the mood you get is pure Dukes of Hazzard; the countryside, the dirt roads, the law, the cars, even some old-fashioned pause-motion action shots that are straight out of the 70s.  And later, there’s almost a Coen Brothers touch, with odd down-home characters and chance meetings.  That’s all to the good, but in the middle what we get is soap opera melodrama, and that’s never any fun.  Conversations & squabbles between John & Deel seem faker than a three dollar bill, aided perhaps by two actors in Dermot Mulroney and Josh Lucas who will never be called Oscar-worthy.  Over-emphasis on dramatic mood in the middle takes this film down a big step, and makes it difficult for the rest to recover.

There were a few high points though, and considering that this is one of DGG’s early films, those successes shouldn’t be overlooked.  Jamie Bell, of Billy Elliot fame, produces one of first American films and does a fairly commendable job, even pulling off a passable accent.  Kristen Stewart even makes a small appearance in this film, right after breaking onto the scene in Panic Room.  With some good young actors and a weird story, there’s enough here to get a little credit, if not enough to recommend.  The beginning is at least interesting, the end introduces some crazy characters, and the young stars pull off the job.  But in the majority middle, the adults mess things up, the action feels ridiculously phony, and the movie drags, bringing the whole project down into the dirt. Video – With an aspect ratio of 1.85:1, the video quality of the Blu-ray disc was perhaps the highlight of the film.  Shot using Bell & Howell Eyemo cameras with Panavision Panaflex Millennium, Panavision Lightweight, Super Speed MKII, & Cooke Cinetal lenses, the high quality of the format was plain to see, with a nice balance of color and crisp visuals.  The countryside was captured in bright clarity on this remastered Blu-ray.

Audio – The disc was done in Dolby Digital, with no menu options of any kind, language or sound.  The Blu-ray’s balance between dialogue and music was a bit off, with loud moments followed by weak ones, and not much attention given to the use of sound throughout. Rent It.  In the vein of Mud, but not nearly as strong, Undertow attempts more than it accomplishes.  David Gordon Green tells a dramatic story in one of his earliest films, and gets a good deal right.  Casting young talent, relying on established methods, painting an interesting picture; there are things that work and that he assumedly lend to his other films later on.  But the bulk of the film wasn’t that solid, relying too heavily on two sub-par actors and the drama produced by their relationship.  Chalk this one up as part experiment, part learning experience, and check it out if you’re a fan of the director.  The video quality of this Blu-ray disc is actually very nice, the audio is only OK, and there aren’t many extras available.  Proceed with caution, but this isn’t a film I would exactly warn anyone away from.