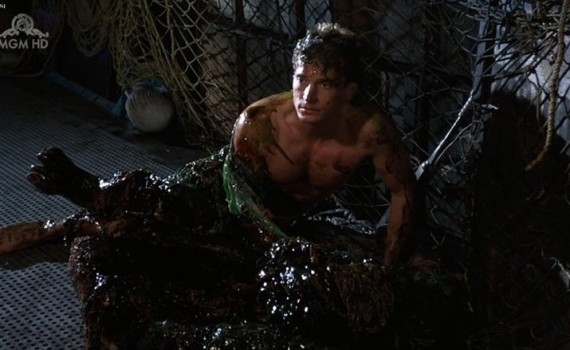 The 80s were a great time for sci-fi and fantasy, even though the technology to pull off such films was nowhere near ready to support the visions of the filmmakers of the time.  But that didn’t stop them from trying, and the result is a wonderfully cheesy, campy attempt at grasping impossible dreams.  Of course, there was Aliens & Terminator, classics that worked even given the technological constraints, though for every Willow you had a hundred Transformations, films that didn’t have the money or the talent to pull off the near-impossible.  Still, there’s a hefty dose of silly magic here for those who enjoy the genre, and this movie is just another example of the fun this time period still allows us to have. Wolfgang Shadduck, intergalactic space smuggler, lone wolf & high adventurer.  We don’t get much of his back story, but he has a group of friends somewhere in the galaxy who love him, he’s got a ship that he calls home, and he’s got some interesting goods for sale somewhere in his cargo hold.  All is going well for Wolf, and he sets his computer to cruise control, ready for a good night’s sleep.  But a good night is the farthest things from what is about to happen.  Wolf is visited by some monster, some demon, some evil that travels through space.  It takes the form of a beautiful woman, makes love to Wolf in his dreams, and infects him with a disease of the mind, a desire to kill, and a future of metamorphosis.

But he doesn’t know any of this yet, all he knows is that he wakes up after a strange dream, feels a little funny, but must jump right into action, as his ship is going down.  After he is knocked unconscious, his ship crash lands on an off-limit planet, depositing him in the middle of a very strange land.  Wolf finds himself in a penal colony, a progressive prison where the convicts walk free, but are pressed into ten years of mining service on the planet’s surface.  In the care of the colony’s only doctor, the beautiful Miranda, Wolf begins to grow concerned; for his freedom as availability for leaving dwindles and for his health as he begins to develop strange pains in his stomach and strange appetites for blood.

On the surface, the story of Transformations reminds us a little of Alien 3, which would come out four years later.  The prisoners, the dark colony, the alien infection, the fight to get off the planet, a blossoming love story, the doctor; it’s all a bit reminiscent and gives this film a little extra credit for perhaps adding inspiration for what would ultimately become a much better film.  But this movie holds its own in a few ways, which shouldn’t be quickly overlooked.  It has some very gross special effects, becoming a bit more of a monster movie than sci-fi.  It has a cool premise and a feel of impending doom, something that keeps the pace of the film moving.  And the acting actually isn’t as awful as you might expect from something you’ve never even heard of.

But that’s not to say that Transformations gets it all right either.  The smattering of exposed breasts are laughable rather than edgy, forcing sex in space to catch our attention but quickly turning it gory in the vein of the film.  Throwing in a semi-religious element with a wise priest of some sort to give the characters advice & a theory on the monster’s origins was unnecessary.  And even the climax was a little silly, ending too easily and without great skill.  There’s a reason why this film never became a classic, and it will never be compared to the greats of its time, those that actually achieved success despite so many physical limitations.  And it’s not even as good as other b-movies of its time, like Forbidden World, which I rather liked.  So temper expectations, but watch if you’re an aficionado. Video – With an aspect ratio of 1.85:1 (1920x1080p), the video quality is the best you can expect from a low-budget 80s sci-fi flick that has been transferred to a Blu-ray disc.  You won’t get the high quality you’d expect from the format, but you’re probably not holding that against the film, knowing that there wasn’t a great quality here to begin with.  It’s a dark film, with a few moments of color, but otherwise meant to be dirty & disgusting.

Audio – The disc was done in English DTS, with no audio options or choices of any kind on the Blu-ray.  As far as sound quality goes, it was better than expected perhaps, with some nice music thrown in for fun. Rent It.  This was Jay Kamen’s only direction, though he’s well-known as a sound editor, working on two dozen films, which include Red October, Sneakers, The Quick and the Dead, Clueless, & Independence Day.  So the guy knows movies, but perhaps wasn’t cut out to be a film director.  Nor was this movie cut out to be an 80s classic, either for being so very good or so very bad.  It lands somewhere in the middle; a passable flick given the times but not something special.  It fails to become awesome and never revels in its “badness”, so the end result is mainly unmemorable.  The video is fine for 28 years later, the audio is OK, and the extras are a nice look back on the film.  But Transformations isn’t special, and won’t be remembered for too much longer.