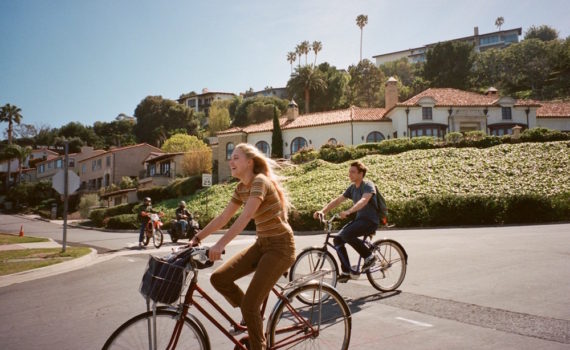 Maika Monroe has yet to prove her staying power since her emergence five years ago, but The Tribes of Palos Verdes is her opportunity to show audiences that she’s an actress with range and the ability to command not only a scene, but an entire film.  With multiple roles between 2013 and 2016, including her breakout performance in It Follows, Monroe can be called a young rising star, but transitioning to serious adult roles is more difficult than surprising us in one shockingly good horror flick.  This is her chance to shine in something dramatic and impacting, and the results, though mixed, were mostly positive. The Mason family has recently moved to California from Michigan, the pater familias Phil being a famed heart surgeon who has brought his talents to the rich and famous of the Golden State.  He is big on prestige and show, joining the country club right away and dragging the family to fancy parties.  His wife, Sandy, doesn’t fit in with the Housewives of the Gated Community, feeling inadequate and unattractive and old.  Then there are the twins, Jim and Medina, as close as siblings can be, and simply trying to cope with the move as best they can, while their parents struggle in their own, private, unhealthy ways.

Phil has an affair almost immediately, which is one of the reasons the family moved to Palos Verdes in the first place, to escape a troubled past.  Sandy has serious emotional issues, and can’t seem to change out of her bathrobe or face her problems head on.  Jim is good-looking and popular, but his mother clings to him as a replacement husband.  And Medina watches her family implode one member at a time, never capable of helping them all at once.  Surfing draws her to the ocean and away from her family’s dysfunction, but it’s always waiting when she returns home, always hanging over the community like a smog that will eventually kill. Maika Monroe is 25 and yet continues to play characters who are 15.  That’s a problem, especially as she moves into these complicated roles/movies, but you can’t blame her for taking parts that she’s offered.  She does have a young look and a baby face, that’s just the way it is, so I don’t fault her for being young while she can, but it doesn’t help audiences take her more seriously.  She evens brings some sexuality to this film, a move many young actresses have tried before, in order to gain respect, which is a twisted recipe that Hollywood has concocted, when you really think about it.  Shailene Woodley tried the same in White Bird in a Blizzard, and it worked alright, just as Monroe attempt ends up OK instead of phenomenal.

Palos Verdes is an attempt at a modern American Beauty, and an attempt to make Maika Monroe into a real star, both goals being reached with fingertips instead of being grasped by both hands.  White Bird was also an American Beauty style film, and it featured an unstable mother, so you can see how filmmakers are using this premise to get our attentions and to launch their actors’ careers.  And again, it worked, but perhaps only mostly and not fully.  The California background is great, Monroe actually is a surfer, the plot is something we’ve seen but liked before, and everyone gives a solid performance.  I was especially impressed by Jennifer Garner, who gave what might be the performance of her career.  The content of the film is recycled a bit, but it’s moving material, especially for anyone whose parents went through a divorce, who grew up watching dysfunction like it was normal.  Palos Verdes didn’t reinvent the wheel, as the saying goes, but it did use an old tire to propel itself through our line of vision, and I liked what I saw. Video – With an aspect ratio of 2.40:1 (1080p HD Widescreen) and shot using an Arri Alexa Mini camera with Cooke Xtal Express lenses, the video quality of the Blu-ray is excellent, with a special eye toward the ocean, the sunshine, and the mischievous nights.  The cinematography was great, as were the costumes, especially Medina’s and Sandy’s, and is was obvious that a lot of attention was paid to make this film look just so.

Audio – The disc was done in English DTS-HD Master Audio 5.1 Surround, with an option of 2.0 Stereo.  Subtitles are available in English SDH and in Spanish.  The audio quality of the film was top-notch as well, with a good sound mix and a nice backing track, complete with a hauntingly simple melody that played throughout.

Extras – The only special features on the Blu-ray are a 9-minute Deleted Scenes reel and a Theatrical Trailer. Recommended.  The Tribes of Palos Altos has flown completely under the radar since its release, but that lack of attention is not completely warranted.  It does borrow heavily from others of the same genre, and the action is fairly predictable, but it also leans heavily on a few choice attributes, which is why the film works.  One is Jennifer Garner’s excellent performance, another is Maika Monroe’s ability to capture our attention, and the last is a wonderful, manufactured mood that sends you right to the beach, to the gated community, to the angst, to the downward spiral of the characters.  The video is beautiful, the audio captivating, and there are a few extras, so the technical aspects won’t disappoint.  The biggest knock on this movie would be its lack of originality and of a big punch; you’ve seen most of this before and a bunch of smaller jabs throughout don’t make the same impact as one solid whomp.  Still, what the filmmakers were trying to do they did well, and what they actors were asked to bring they brought, which is not something every movie can boast.