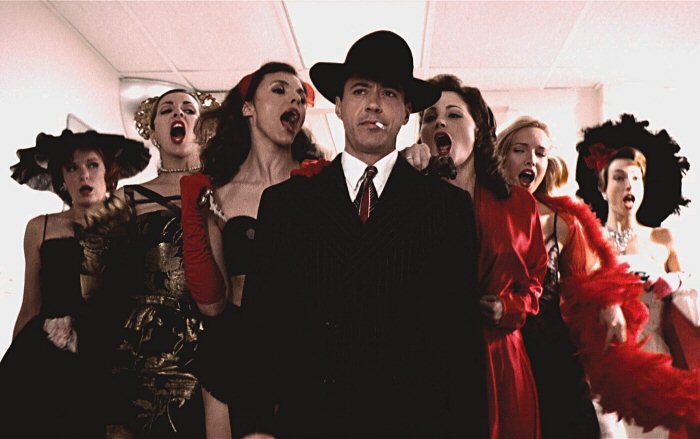 For an unliked film, there are a multitude of ways in which you can like The Singing Detective.  You can be a fan of the original (The Singing Detective mini-series, 1986, starring Michael Gambon).  You can enjoy the pulp/sleuth/Philip Marlowe detective genre, digging the Raymond Chandler vibe.  You can follow Robert Downey Jr., who has had one hell of a fascinating career.  You can love bubble gum pop music and enjoy watching it brought to the modern screen.  You can favor The Fly, Brazil, L.A. Confidential, Mulholland Dr., Dawson’s Creek; take your pick, they all have little pieces embedded within this film.  You can even hate Mel Gibson and wish to see him as a bald, bespectacled psychiatrist.  My point is, there are a million ways to appreciate this oddball movie, and I’m shocked that it gets such poor overall ratings, especially when I found it so captivating. Welcome to the mixed up maze that is the mind of Dan Dark.  Dan is a fiction writer by profession, ‘The Singing Detective’ being his #1 novel.  He writes about sleuths & dames, hoods & rats, murder & mayhem.  And as he writes, he adds a little of himself to each story, as all great authors do, making their hopes & fears come to life amongst the pages of their books.  But it’s when his stories begin to come to life in the real world that the problems start.  Dark is admitted to a hospital for a rare skin condition that has left him completely covered in hives, boils, rashes, etc.  He can’t be touched, can barely move, is in intense pain, feels only anger at his situation, and quickly becomes the bane of the staff.  But his illness is something born of his brilliant mind, and it will take his facing his problems in order to cure what actually ails him.

Meanwhile, Dark is hallucinating a paranoid delusion that his refused sedatives might keep at bay, if his stubbornness could be set aside for a while.  But he prefers a world created from his own imagination, anything but his depressing reality.  Dark begins to believe that dangerous men are after him, that his wife is betraying him, that his doctors can sing, that the people from his past have taking varying forms to haunt him in the present.  So we’re taken down a very strange path, a hallway in which Dark’s ideas parade and his memories create fanciful characters that would fit right into his noir-style novels.  If only he could accept that no one is out to get him, that his disease is self-inflicted, that the doctors only want to help, that his wife loves him dearly, everything would turn out just fine.  But aren’t they, is it, do they, does she, and will it ever? The Singing Detective is one of the strangest movies you will ever see, a confusing combination of Naked Lunch and Fear & Loathing, but without the drugs, which makes it all the more weird.  It’s a film noir for part, a present day drama for another, a flashback history for the rest.  And interspersed throughout are Doo-wop musical numbers.  Yes, that’s right, Dan Dark spends much of the movie imagining himself as a lead singer of a band singing bubble gum pop and cheesy love songs.  Oh, and the doctors sing too, sometimes dance, and generally go wild.  It’s a peek into a cracking mind, a mix of delusion, avoidance, brainstorming, wishful thinking, paranoia, and outright lies.  The plot makes absolutely no sense, other than as a progression toward a possible recovery for Dan Dark, with the details not really mattering at all and the outcome very unclear.

But through it all, and despite an extremely unusual premise, the movie entertains & inspires in a very odd way.  You begin to lose your own mind just a little, understanding Dark’s issues a little more deeply with each passing scene, until you come to terms that this is a very sad man deserving of your concern.  Downey Jr. plays Dark perfectly, especially early on as he is bed-ridden.  He’s at one time hilarious, depressing, relatable, and completely foreign, a man from nowhere who needs nobody and yet is still a scared little boy inside.  And then there are the side actors, the players in this wacky game of let’s-be-three-characters-at-once-because-Dan-Dark-has-lost-his-mind: Mel Gibson, Robin Wright, Katie Holmes, Adrien Brody, among other known faces with lesser known names.  Collectively, this is as strange a cast as you’re likely to see, which can also be said about the film as a whole, one of the weirdest movies that seems to be about nothing but could actually have a world to say.

Video – With an aspect ratio of 1.78:1 and shot using Clairmont cameras, the video quality of this Blu-ray disc is a bit more 1983 than 2003.  The clarity of the picture takes a backseat to the story, which is one part hospital melodrama and one part film noir.  Stunning visuals and crisp edges weren’t the focus here, and perhaps a transfer to such a high-definition medium was unnecessary.

Audio – The Blu-ray was done in Dolby Digital, but offers no language options, subtitles choices, or audio selections of any kind.  There is no disc menu, other than a photo, a play button, and access to the chapters of the film.  The sound quality of the film was quite excellent, with Doo-wop music in many scenes, sounding pure & simple & record-quality.  The song selection was pivotal to the action and should be noted as such.

Extras – There are no extras on the Blu-ray disc. Highly Recommended.  At one point, Dark says that he wants to write a story that’s “all clues, no solutions, ’cause that’s the way things are.”  Well put, and this film brings that concept to life, creating a story that you could try to understand if you had 100 years and a mind to lose, but might be better off left alone.  It’s a film with clues as to the point, but no grand scheme to define, a story of characters and feelings with very little resolution.  Ironically, Dark is also fond of saying “period” as a Marlowe-ian way of punctuating his speech and creating novels out of thin air.  That’s ironic because there are no periods in this tale, no finales, no perfect endings, except what you might make up in your mind to justify the time you spend watching the tangled story unfold.  This is a movie of mood, of artistic choice, and not one to be taken too literally.  The video quality of this disc is fine, the audio quality excellent, and no extras are available on the Blu-ray.  Watch with tentative expectations, knowing that you won’t feel wonderful at the end, not because everyone dies in an ironic explosion, but because you feel unsure while viewing this movie and you will leave feeling the same.