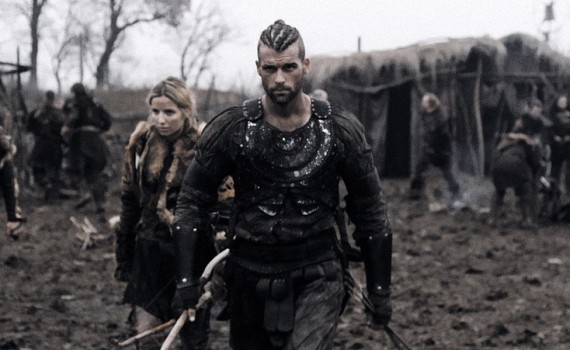 Sword of Vengeance is advertised as being from the creator of Hammer of the Gods.  To some of you, that might be an incentive, having watched & enjoyed that film.  But this is not a sequel, it’s more a film done in the same vein, another Saxon bloodbath written by Matthew Read, who also wrote material for Valhalla Rising, a surprisingly good film.  So “from the creator of Hammer of the Gods” means nothing to me since I’ve never seen that movie, but I can understand the connection between the films, and even the style that Read enjoys.  Only 6000 users on IMDb did see Hammer of the Gods, as opposed to the 40,000 who saw Valhalla Rising, and they didn’t like it.  It’s getting a 4.5/10 and it reportedly grossed $438.  Now, at first I thought that was 438 million, but no, I think that’s just 438 dollars.  And not that I’m a box office guy, but that seems rather low.  Anyway, I won’t be running out to see Hammer of the Gods, and before it bothers you that I’m writing off a film instead of writing about it, think on this; it’s not my job to see every movie.  It’s also not my job to seek out every movie.  As with authors, filmmakers had better hook audiences if they want them to watch, keep watching, and convince others to watch.  The handful of people who actually saw that film have spoken, and not highly.  So that brings us to the movie at hand.  Since only 600, not 6000, IMDb users rated Sword of Vengeance, we’d better use other films to help us better predict the outcome of this one.  It could either turn out to disappoint, like Hammer, or surprise, like Valhalla.  Now that I’ve sat through the 87 minutes that felt like 387 minutes that is Sword of Vengeance, I can say, without seeing it, that this is more the former than the latter.  And so, if its quality is any indication of its predecessor’s, going back to see more of this new style would be a bad decision.

Here’s the back story.  England in the 11th century is a place of upheaval.  William the Conquerer has won possession of the British Isles, and is attempting to establish Norman control over a Saxon country.  It’s not going at all well, with Viking invasions, trouble back home in France, and the difficulties of securing the north in the face of harsh conditions and angry natives.  All that can be done is to kill anyone who raises a protest, drive back any rebels, and hope they stay beaten.  This is the strategy used by Lord Durant and his two sons, Romain & Artus, and although troubles never cease, their limited soldiers seem to be enough to pin back the unorganized forces of the angry Saxons.  But change is coming in the form of an unknown man, a killer shrouded in mystery and heaped with skill, someone who could lead the people in revolt if he were to ever put his mind to it.

They call him the Outsider, and he isn’t making friends quickly.  First, he kills a group of soldiers who want him to pay a toll.  When their bodies reach the south, Durant sends his son Romain to deal with the problem.  The local people want no part of Durant’s small army, so they capture the Outsider, planning to give him as an offering to spare themselves trouble.  But when some of their own are attacked by Romain, the Outsider comes to their rescue, procuring Romain’s eye and sending him back to his father with a message.  Next will come Artus, but by the time he arrives the Saxon’s have banded together under the Outsider’s command.  No longer are they a gang of malcontents, but rather a unified people.  And so Durant will come himself, beginning what will be a battle to change the fate of the land, all surrounding a man who is more than he appears to be and has a hatchet to bury, preferably in the dead corpse of the evil Lord Durant.

Hearing that summary, you might prepare yourself for a good movie, or at the very least an entertaining story.  Hell, while writing it I almost convinced myself that the film couldn’t have been as bad as I remember.  But then I think back and yes, yes it was.  So we’ll focus on the pleasant first, before we turn to the awful.  I love medieval history, especially British, so I was right there along with this plot.  Sure, the actual action didn’t have much to do with historical fact, and the William the Conquerer stuff was left behind right after it set up the story, but I enjoyed the story for what it was, and didn’t think too much about how much of it was, most assuredly, pure fabrication.  The film had a Braveheart feel, though of course minus the epic production, and even added in some good back story, a touch of romance, unity of people, and fight scenes galore.  If what you’re looking for is gritty action and bloody sword fights, then you’re in luck.

However, if you happen to be looking for anything else, like, umm, I don’t know, acting & direction & editing & cinematography & the stuff that generally makes movies enjoyable, then you’re in for a disappointing evening.  Our hero never attempted any facial expressions, so it was hard to tell if there was any potential talent there, while our heroine outdid herself by screaming battle commands like she was that angry kid from Bad News Bears.  No one else seemed at all invested in making the film palatable, except perhaps for the villains, who at least tried to be unlikeable.  But even putting the acting aside, the film was hard to watch.  No color, nothing but mud, throats slit in b-horror fashion; it might as well have been a black&white college project.  And oh my god the slo-mo.  Every scene seemed to be swimming through pudding, very dirty pudding, and to say that the pace was torturous would be like saying the action sequences were only somewhat unbelievable.  I can’t say that someone dropped the ball, more like everyone involved dropped all the balls, as there’s nothing to point to & applaud beyond the concept, which, let’s be honest, could have been imagined by a daring 12-year-old.

Video – With an aspect ratio of 16×9 Widescreen, the video quality of the Blu-ray is only just good enough.  You won’t find the high clarity of images and the broad use of color here that you might expect from other Blu-ray features.  What you’ll get is grays & browns, an intentionally grainy picture, and action sequences shot in slow motion that are less vivid than what you could see on your local sports channel any given evening.

Audio – The disc was done in 5.1 DTSHD Master Audio, with an option for 2.0 Stereo.  English SDH subtitles can be switched on or off, but there are no other audio options available.  The sound quality was completely forgettable, with all attention given to the slitting of throats rather than to the production value of the technical aspects.  Don’t expect to be wowed by the quality of the Blu-ray here.

Extras – There are a few extras on the disc.  Interviews are available with either producers Rupert Preston and Huberta Von Liel or director Jim Weedon.  Behind the Scenes footage can be viewed for three different segments: Broll ‘First Encounter’, Night Battle, and Shadow Walker vs Romain.  And lastly, there are four trailers: Sword of Vengeance, Kung Fu Killer, These Final Hours, Enter the Dangerous Mind. Skip It.  I may have missed Hammer of the Gods, but, as the old joke goes, I wouldn’t say I missed it.  And I know, who am I to judge, I’m prematurely burying it, but I feel like I have at least some justification.  If the style of that film is anywhere near the style of this one, if the same effort was put into that project as this one, than I think I know what I avoided.  Sword of Vengeance is an action failure and a film that doesn’t deserve much eff0rt in finding the positives.  Again, it isn’t our job as an audience to forgive a film its faults, nor are we required to give it the benefit of the doubt.  We’re allowed to be critical when filmmakers make mistakes, and here’s an example of a large mistake made.  The video is only fine, the audio passable, there are a few extras, but the movie as a whole is more troublesome than worth the trouble.